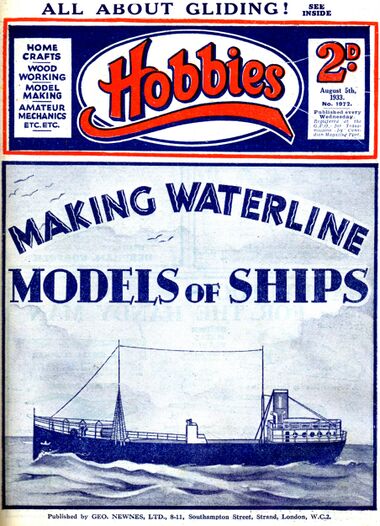 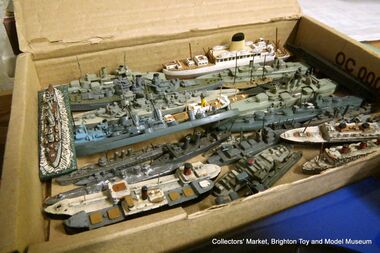 A collection of ~1:1200 waterline ship models in metal and wood, waiting to be sorted and priced for the museum's Collectors' Market [image info]

Waterline ship models are, simply, models of ships that only include the parts that are visible, above the waterline. Representing the look of a ship at sea, these models made good play-toys, as they had convenient flat bases and could be arranged on a tabletop or carpet to give the appearance of a fleet).

The small-scale waterline model format of 1:1200 seems to have been kick-started by the Royal Navy's ordering of sets of 1:1200-scale waterline models to be used for ship recognition training (where it was actively counterproductive to also model the look of the unseen underwater parts). The scale allowed a useful range of military ships to be modelled reasonably well to a common scale, without being so large as to be unwieldy, or too small to be forced to omit important visual detail.

Although Edward Hobbs' 1928 piece on waterline models said that the format was generally assumed to be between one inch to 100 feet (1:1200) and one inch to fifty feet (1:600), the 1:1200 was more convenient for small toys, and cheaper to produce. It also had the advantage that it allowed the model designer to read off dimensions from plans in feet, lop off two zeroes and have the final size in inches (one inch=100 feet). On the continent, where metric measurements prevailed, corresponding models tended to be produced in 1:1250-scale (one eighth of 1:10000-scale), which was close enough to 1:1200 for the difference not to be too noticeable.

THE term water line models is given to all kinds of ships which are represented as if floating on the surface; in other words, the only part of the hull which is modelled is the part appearing above the water.

Although the expression can therefore be applied correctly to a sumptuous model of a large scale, it has now become definitely associated with miniature models, such as those illustrated, and generally made to a scale of 50 to 100 feet equals 1 inch. Thus at the latter scale a model of the largest liners approximates to 9" in length, the average battleship about 7" or rather less: destroyers and cross-channel steamers working out about 2 1/2" long.

At this small scale it is clear that the amount of detail that can be separately modelled is limited, and in practice everything but the general characteristics are omitted. Accuracy of outline is however an essential, both in plan and elevation. Imagine a big ship seen from the shore, while steaming along, say, a mile out at sea. Suppose also that if a foot rule were held in front of the eyes, about 12 away, and the apparent length of the boat were measured and happened to be the equivalent of 100' equals 1", then it would be impossible to detect any people on the ship, nor would it be possible to see any small details.

Although historical models were sometimes be produced as "waterline-only" models, clients for professionally-built large-scale ship models tended to be the owners of the actual ships (or prospective owners, if the model was being used to show shareholders what they would be paying for), and for these purposes, the ships models needed to be "complete", and many amateur ship modelmakers had a keen interest in ship design, so the idea of artificially "cutting off" the model at the waterline was not always popular.

As a result, although one can sometimes find high-quality waterline models designed to be part of larger displays, the fact that most "waterliners" were small meant that the term had already become synonymous with 1:1200-scale or thereabouts by the late 1920s.

1:1200-scale waterline ship models were popular in the 1930s and 1940s, and were manufactured by a number of companies. There were few technical obstacles to building a range ... it helped if a company had a ship enthusiast to make sure that the models were correct, making a prototype ship wasn't too difficult, and then casting the models in lead didn't require a great deal of machinery or cutting-edge engineering expertise, after which it was a question of having them painted.

When Airfix started producing a range of military ship models, they also used 1:1200-scale, designing the models to have a detachable hull, cut at the waterline. This meant that the model could be either a complete model or a "waterline" version, and that 1:1200 waterline collectors and modelmakers would be tempted to add a few Airfix models to their existing collections.