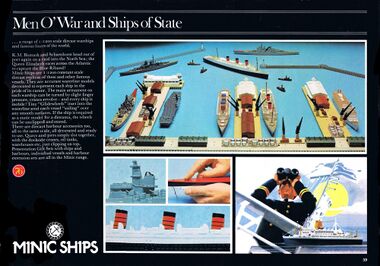 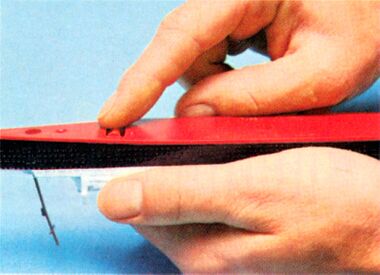 The "second-issue" "Hornby Minic" logo. This retained the anchor from the original logo, but replaced the Tri-ang triangle with a surrounding circle of rope [image info]

Tri-ang's deceased 1960s Minic Ships range was resurrected and sold by Hornby Railways between 1976 and 1980, as Hornby Minic Ships.

After the behemoth toymaking company Lines Brothers Ltd. (main brandname: Tri-ang) called in the receivers in 1971, its range of toy brands and businesses was broken up and disposed of, with the Hornby models railway business becoming a separate company Hornby Railways, in 1972. Somehow, amongst the mass of disposals and deals, the rights to the Tri-ang Minic Ships range ended up with Hornby Railways: while Hornby's distribution network did reach a lot of toyshops that might have liked to stock Minic Ships, the mixture of 1:76 model railways and 1:1200 model ships was not altogether natural, and while Hornby Railways did promote the range, it's slightly odd to suddenly find a page on Minic Ships in a Hornby 00-gauge model railway catalogue.

Hornby's "second series" additions to the range, made in Hong Hong, tend to be sniffed at rather disdainfully by Minic Ships purists, and the idea of increasing the ships' "play value" by giving them a plastic base with removable wheels so that they could scoot across hard floors also probably didn't go down hugely well with the existing customer-base.

Men O'War and Ships of State

K.M. Bismark and Scharnhorst head out of port again on a raid into the North Sea; the Queen Elizabeth races across the Atlantic to capture the Blue Riband!

Minic Ships are 1:1200 constant scale diecast replicas of these and other famous vessels. They are accurate waterline models decorated to represent each ship in the pride of its career. The main armament on each warship can be turned by slight finger pressure, cranes revolve – and every ship is mobile! Tiny "Glidewheels" inset into the waterline send each vessel"sailing" over any smooth surfaces. If the ship is required as a static model for a diorama, the wheels can be unclipped and stored.

There are diecast harbour accessories too, all to the same scale, all decorated and ready to use. Quays and piers simply slot together, with the dockside cranes, oil tanks, warehouses etc. just clipping on top.

Presentation Gift Sets with ships and harbours, individual vessels and harbour extension sets are all in the Minic range.

The 1977 price list suggests that Hornby Railways were only really interested in selling the larger high-profile ships and the packs, and not little accessories and boats (except as sets). We haven't seen any other Hornby-era Minic listings of the range.