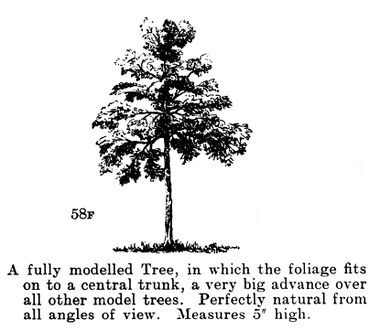 Initially, the lead Britains Model Home Farm range included simple "flattie" German-style flat painted lead trees with narrow bases, which could be used as background pieces, or, at a pinch, as part of a linear piece of hedgework or fencing.

These were fairly small, amd there were obvious limitations for how they could be used.

The Tree and Gate (and Swing)

A particularly ambitious tree model, model 7F Tree and Gate was a rather lovely artistic painted lead three-dimensional tree, made technically possible by having all the tree limbs stumped (so that the model was either of a dead tree, or of a tree that had been severely cut back and hadn;t yet started to regrow).

To increase the importance of the model to a layout as a "showpiece", the tree was multi-purpose, with a swing fence that connected to one side of the tree, and a cpupleof connectors on an overhanging branch that could take a children's swing and figure of a sitting child.

The New Modelled Tree, No.58F, finally took a modular approach to assembling complete trees whose complexity (in three dimensions) would be impossible to cast in a mould as a single piece. The New Modeled Tree had a trunk, topped by a number of short truck sections, each of which had its own horizontal bough of greenery, followed by a top-piece.

After the war, Britains extended the idea of the user-assembled "Fully Modelled Tree" to plastic moulding, and produced a range of tree kits consisted of parts that were fitted togther by the buyer.

The beauty of this approach was that, quite apart from the fact that it allowed complex shapes that woud never be extractable from a mould if you tried to mould them in a single piece, the multi-part design allowed the buyer to purchase a number of identical tree packs, and build each one slightly differently, so that no two trees looked quite the same. While a single tree loooked quite nice, the full effects wasn;t achieved until one had a cluster of the same type of tree, all looking closeley similar in character, but each with its own unique profile.