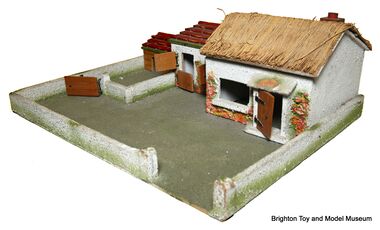 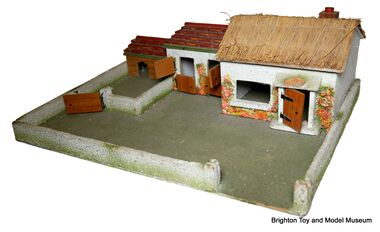 A post-war (1950s) Farm Playset, made by Hugar Models for Britains Ltd. The farmyard is scheduled to go on display in October/November 2016.

The farm is built on a 12"×16" base with a low perimeter wall, with a entrance front right.

The main farm building is set on the right rear of the board, and has a symmetrical two-plane sloping thatched roof with its spine parallel to the building's front face, and a low wooden chimney at the rear, set towards the right.

The front of the farm building has a hinged wooden doorway with shallow porch on the right, and a low, wide, open, lower-silled window on the left.

The farm building is 6" wide without the overhanging roof. Set into its left is a smaller stable building, 5" wide including roof, with two split stable-type doors. The remaining five inches is taken up by a low pen, chicken-coop or kennel with two open entrances, and with the region in front cordoned off with another low wall, with a hinged gate.

The base, low walls and building walls are all textured and painted, and the main two buildings also have green red and yellow paint to give the impression of flowing climbing plants.

The farm was donated to the museum by by Mary Wyatt in April 2016, along with a set of F.G. Taylor farm fencing and some (mostly Britains) lead farm animals.

Although we haven't yet found a matching image to identify the exact model, this farm is built using classic Hugar techniques, finishes and proportions, and the styling is an exact match to other farm buildings made by Hugar and sold by Britains.

The auction house Vectis have identified an almost identical farm building as a Britains Farm Yard 164F (1958) - However, although that piece and this are obviously built to the same basic plan, and have exactly the same technique used for finishing, our piece and the Vectis one have a range of minor differences – most notably our one has the farmhouse door on the right of the window, and theirs has it on the left. We have a copy of the 1958 Britains catalogue, which doesn't list the farmyard: Opie's book "The Great Book of Britains" says that the 164F appeared in other sales material but didn't make it to the main catalogue, perhaps because of issues with the (unnamed) contractor that had taken over from Hugar – but this leaves open the possibility that the museum example might have been made by Hugar before that other contractor took over, accounting for the minor differences. We don't know.

Another complication is that the 1958-59 trade catalogue has deliberately "broken" runs of page numbers, with breaks between sections. The catalogue introduction makes it clear that due to the cost of typesetting, the catalogue was to last for two full years, from January 1958 to December 1959, and the gaps in the page numbering were presumably to allow extra pages to be added or pages removed without re-setting the entire catalogue. This opens the possibility that perhaps not all copies of the 1958 catalogue might be identical ... but the separate January 1958 export price list (No.45) doesn't list the 164F either.

If we find ourselves with access to more Britains catalogues and brochures from the period, we'll investigate further.

Hugar's range of model farm buildings for Britains were preceded by a range of "trench" sets made for the company, which portrayed scenes from the trenches in World War One (a lookout point, medical aid building, and so on), and which were built on standardised sections of baseboard so that they could be butted together to make larger scenes.