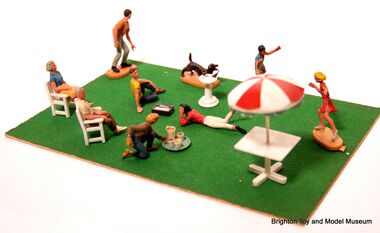 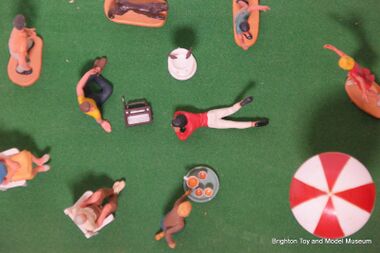 The 1969 catalogue lists the set with the more general-purpose name, "Britains Folk", and includes it in both the "Britains Floral Garden" and "Britains Farm" sections.

Due to their late appearance (and the fact that they were perhaps not as essential for a farm or garden as, say, farm animals or plants), the "Britains Folk" pieces are reckoned to be the rarest and most difficult to find of the range. The transistor radio in particular was especially prone to getting lost.

The 1969 catalogue lists the pack as:

, where "etc." seems to refer to a plastic ball for the children and dog to play with, and perhaps a spade.

The pair of teenagers sprawled on the ground with their transistor radio are classic 1960s. The adults consist of an older man and woman sitting, a man with spade, a man poised to hold the wheelbarrow, and a woman crouching on one knee who might be weeding or planting.

We think we probably have the complete set ... although the shears, ball and spade are probably buried amongst the foliage of the rest of the collection, in storage (November 2016).