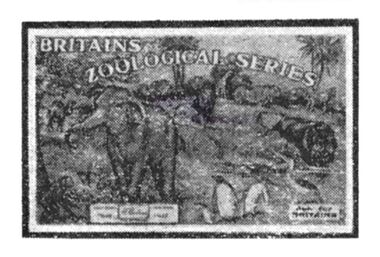 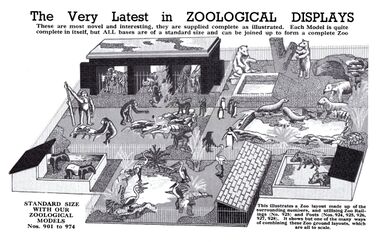 "The very latest in ZOOLOGICAL DISPLAYS", page from the 1940 catalogue, showing a number of Britains Zoo enclosures assembled to form a zoo display [image info]

" There are few things more interesting either to young or old, than a Zoo; the variety of animals, each characteristically different from the others, majestic, ferocious or docile as the case may be, providing something new to hold the attention, and the whole surrounded by that indefinable attraction of the wild, appealing perhaps to some remote sense when the human being was more the hunted than the hunter.

We are, however, wandering from the point, as this is not intended it be a treatise on Natural History, but a short introduction to BRITAINS LIMITED Zoological Series, which is, as the name implies, a series of models taken wherever possible from life and reproduced with care as to detail, and which will give the "collector" the opportunity of having his or her own Zoo at home and will, we hope, provide many long hours of pleasure and enjoyment, with perhaps some measure of education. " 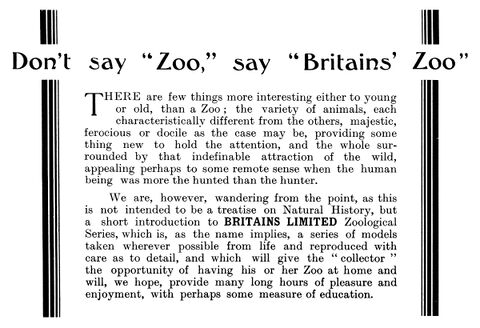 The museum's collection of "Britains Zoo" pieces is now perhaps around 90% complete, and lives in the zoo display in Arch Three.

The following 68 pages are in this category, out of 68 total.

The following 85 files are in this category, out of 85 total.