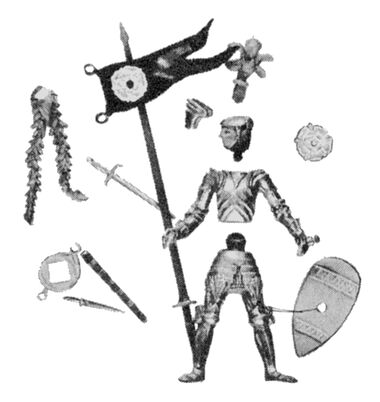 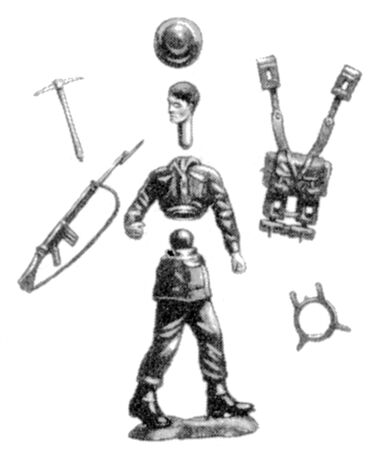 The Swoppets range of 1:32 plastic figures with interchangeable parts appeared in 1958, originally as a range of "cowboy" figures, which were later joined by a group of "indians" (i.e. Native Americans), and then Fifteenth Century Knights in armour, and British Infantry. Most of the figures were produced by Britains Ltd., and designed by Roy Selwyn-Smith, a highly-respected sculptor very experienced in designing for plastic who had been designing for Herald Miniatures until Britains took over the company.

According to James Opie's book on toy soldiers (2016), "... the Swoppets were without doubt the best looking movable part figures ever produced".

The subject of what is and what is not a Swoppet is surprisingly complicated.

For our purposes, we're treating the "full" Swoppets as being the Swoppet Cowboys, Swoppet Indians, and Swoppet Knights, and also the later British Infantry Swoppets. These all share the same two-part body with two fixed arms on an upper torso and two fixed legs on a lower torso, attached by the same large swivelling ball-and-socket waist joint, with s swivelling head.

However, the brandname seems to have been so effective that Britains ended up applying it semi-generically to things that weren't actually proper Swoppets, and had a different fundamental design that wasn't Swoppet-compatible. The catalogues in our archives (1960s) also list and index the posable plastic American Civil War figures as being Swoppets, but the accompanying pictures don't appear to show the brandname anywhere on the products' packaging, and the accompanying text slightly downplays the relationship, saying that the Civil War figures include "some" of the Swoppet features, in that they have moving heads and arms, and allow hats and rifles to be exchanged. This isn't quite the same as the Swoppets concept of figures that try to have pretty much everything swoppable.

The difficulty in extending the Swoppets concept to other "combat" groups was that in modern armies, there wasn't so much to swop. While Cowboys could have different hats and different coloured neckerchiefs, and different clothing that could be changed by swapping around torso and leg combinations, it was more difficult to produce new hybrid characters by swapping parts on soldiers who were all wearing the same standardised uniforms, all in the same colour.

Some collectors apparently also refer to the contemporary "Eyes Right" range of plastic British regimental figures as Swoppets, but this grouping seems to be based on based on date range and styling rather than on any attempt at swoppability. It's also possible that Britains may have later retrospectively referred to other ranges as Swoppets, but for these pages we're steadfastly ignoring this possibility and sticking to the 1960s catalogues.

To further complicate classification, we also have the large (and nice) accessories that were made to accompany Swoppets figures ... the Concord Overland Stage Coach for the cowboys and indians, and the Siege Engines for the Swoppet Knights, which, while they were shown on the same catalogue pages and were obviously meant to "go" with Swoppets, weren't actually Swoppets themselves (in that they weren't meant to come apart and reassemble into other versions with different parts).

Perfect partners for a Wild West layout – these "swop and swivel" models feature interchangeable parts and are the original creation of BRITAINS LIMITED. Heads, bodies, scarves, gunbelts, etc., are detachable and interchangeable. Even the miniature guns, accurate replicas of the Colt 45 revolver, can be removed form their holsters. These exciting hand painted models are available singly or in the handsome presentation window cartons illustrated.

Here's perfection in miniature. Magnificent models of Fifteenth Century Knights to relive the Wars of the Roses. Made in the Swoppet tradition, all parts fitting firmly, yet easily detached. Lifting visors, removable swords, swivelling bodies, all brightly coloured and adorned with their heraldic devices. Available singly or in the handsome window cartons illustrated.

It might have been interesting, given the 1960s/1970s craze for kits and figures of "freaks" and monsters, if Britains had produced a Monster Swoppet range, or produced animals with interchangeable heads and parts, but perhaps that idea might have offended the aesthetics of the "purist" Britains designers, who were essentially producing highly artistic classical sculptures in miniature that strove for historical accuracy, and might not have liked the idea of corrupting their range with models of "made up" creatures.

Britains therefore missed on the craze associated with the Aurora Monster kits (starting with Frankenstein in 1962, obvious Swoppet material), which continued to be fuelled by the The Addams Family (1964-1966) and The Munsters (1964-1966), and which showed up in American plastic kitmakers "freak" models (like those produced by Hawk) inspired by 1960s counterculture cartoons.

Britains could have had a popular range of generic monsters with swappable parts, and then added robots to the range, so that one could have a gorilla with robot arms and a dinosaur legs, or a spaceship with arms and a robot head. They could have ridden the wave of Japanese Manga monsters, coasted through the Dungeons and Dragons and Fantasy genres and even benefited indirectly from the later 1980s "Transformers" craze for vehicles-that-turned-into-robots. But they didn't.

In the end, the public's desire for plastic figures that let one pick-and-mix body parts ended up having to wait for Lego's more abstract and highly successful Minifigures range, which first properly appeared in 1978.

The following 76 files are in this category, out of 76 total.