A second cabinet of toy and model boats, in Arch Two, near the Museum's Puppet Corner.

Underneath are three larger models of ships and boats. 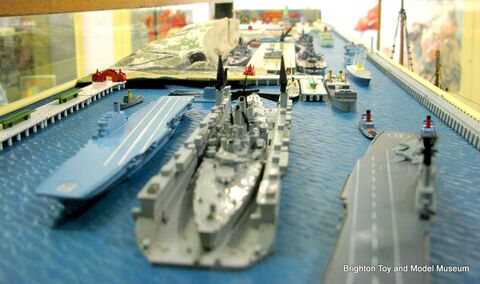 The Minic Ships display in 2011

The display includes a three-piece rubber representation of Dover Harbour that was manufactured by Young and Fogg as a shop display piece for the range, shortly after Y&F was absorbed into Lines Brothers: the Dover Harbour pieces do not seem to have been made available to the public, and are very rare.

The display as pictured above in 2011 was very naturalistic. However, since then we've gradually acquired more and more items from the range, so that the display is currently quite packed. With even more items due to be added soon (from two further donations to the museum in 2018), when these further pieces are added, the display will be in danger of being so packed that it'll be difficult to see the water!

Computer-generated 3D recreation of the display in December 2018

One of the 2018 donations included a Minic Ships 1960 catalogue: we've scanned this, broken the scans into individual images, and laboriously edited out the backgrounds to produce a nice reference set of images. However, the 1960 catalogue doesn't include images of everything, as some models appeared a little later.

Currently (as of October 2018), we're getting perilously close to having examples of every single model produced in the Minic Ships range in the 1960s: It would be very nice to have a definitive collection on show, so we're putting together a "hit list" of the last few pieces that we still need, and if we manage to end up with everything, we may need to think about ways of extending the display to fit everything in.

The following 62 pages are in this category, out of 62 total.