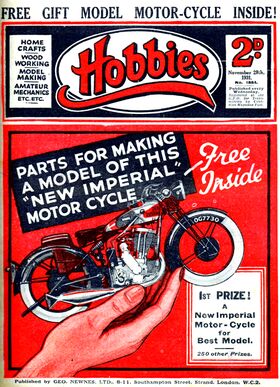 An award-winning one-sixth scale model of a New Imperial 7B 499cc motorcycle, built by Robert Brown of Croydon in 1932. The model won a medal and certificate (displayed) at the Model Engineer Exhibition. 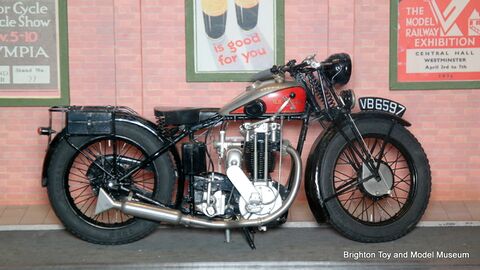 Brown was a watchmaker by profession, and owned and rode a new Imperial 7B motorcycle for real, so the building of the model involved long hours in his garage with both the model and the original in front of him, for reference.

The result was an exceptionally realistic scale replica, honed to a rare degree of detail.

The New Imperial Motorcycle Company would have come to the attention of many modelmakers during the early 1930s through their apparent tie-in with Hobbies magazine. Hobbies produced a card model kit of the motorcycle in 1931, and offered the real thing as first prize for the best finished model. Hobbies then went on to offer motorcycles as first prizes in other modelmaking competitions.