From The Brighton Toy and Model Index
(Redirected from The Museum)
Jump to:navigation, search 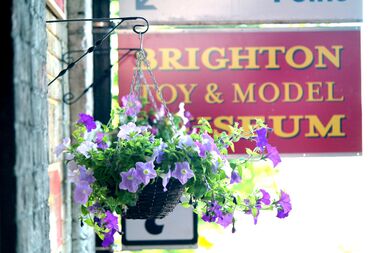 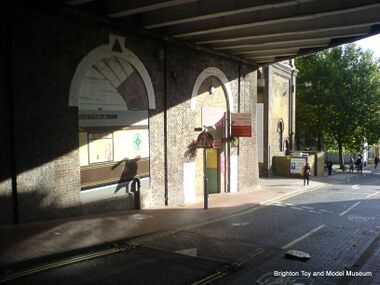 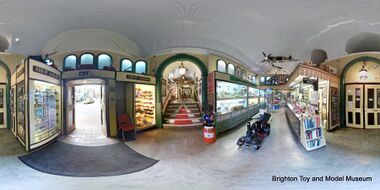 Museum lobby, 360-degree panoramic view. The main museum area is up the set of steps in the centre. Standard wheelchairs can be accommodated via a second entrance [image info] 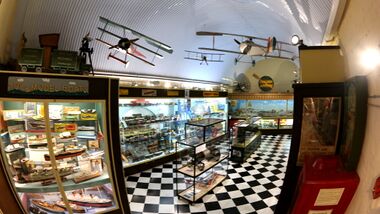 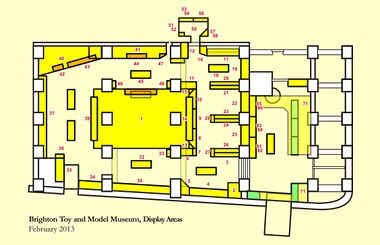 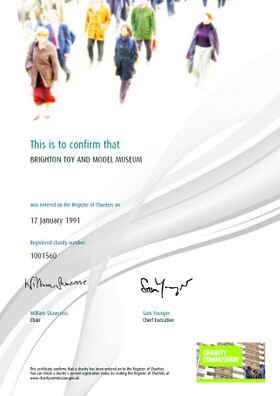 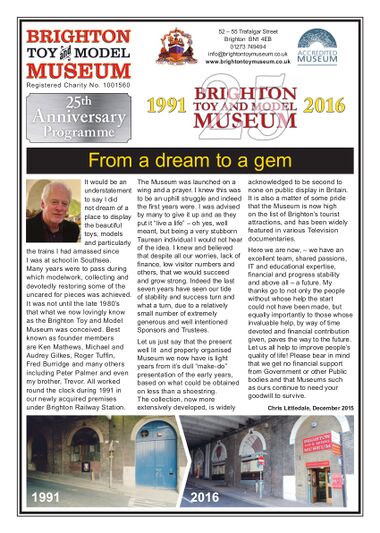 The Museum celebrates its 25th anniversary in 2016 [image info] 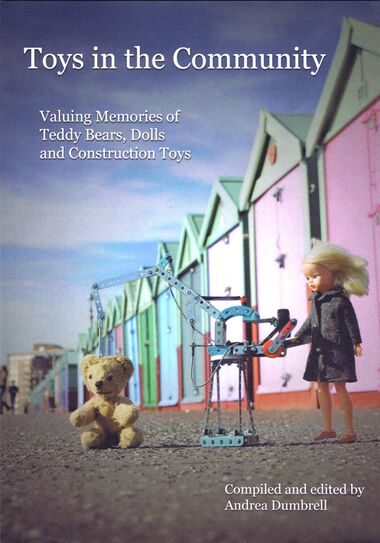 Set in a series of Victorian railway arches underneath Brighton Station, Brighton Toy and Model Museum is one of the World's key centres of excellence for the preservation and display of toys and models, focusing on the golden age of British and Continental toymaking from the first to the fifth decades of the Twentieth Century.

2016 was the 25th anniversary of the museum, which first opened its doors in 1991. While 2015 was spent focusing on general infrastructure improvements, 2016 was marked by some significant improvements and additions to the displays and collections. 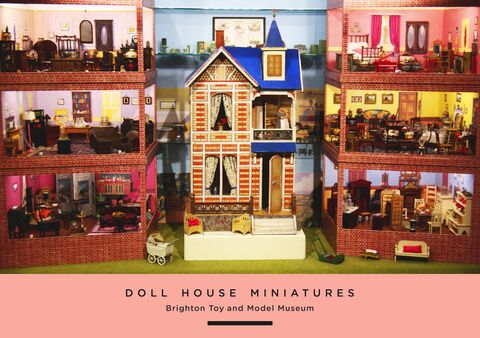 The museum has a policy of continuous improvement, with important new exhibits being added and new display spaces being created in nooks and corners of our limited space, practically on on a month-by-month basis. The density of the exhibits means that labelling needs to be minimal ... but to compensate for this we invest heavily in producing online contextual material – catalogue images, advertising and other promotional and background material on the exhibits.

This archive material is viewable online for everyone, and has become a world-class resource. It's also available within the museum via a free wifi connection on the Museum tablets, and also on visitors' own devices, supported by QR code links and NFC "swipe" points.

By the mid-C19th, the industrial revolution had changed most other aspects of how we worked, travelled and lived, and the idea of having workshops equipped with machine tools started to be applied to toymaking.

A range of toymaking companies emerged in Southern Germany, the biggest being Bing and Märklin, who dominated the World market for metal toys. The end of the C19th saw model engineering emerging as an increasingly serious hobby.

The years up to World War one saw a rapid growth on toymaking sophistication, the appearance of Meccano as the first mass-market construction set (other than Anchor Blocks), the rapid growth of Bassett-Lowke, and the birth of the teddybear.

During this period, Britain saw an explosion in metal toymaking as local companies found that they could now enter a market (metal toys) previously dominated by the German toymaking giants. It also saw an influx of toymaking talent from the Continent as political instability abroad prompted a wave of skilled émigrés and refugees looking for the comparative political stability of the UK. As production shifted further from wood to metal, the industry shifted from producing individually hand-carved pieces created by unnamed partworkers and local carpentry workshops, to the use of highly-promoted brandnames and modern factory production. Talented and creative toy designers of the period could now see their works being sold and promoted to a wider audience, and great toy design became something that could transmute a simple piece of low-tech printed and folded tinplate or a lump of painted lead into a mass market product. The Golden Age saw the appearance of ever-more-sophisticated gauge 0 model railways, the birth of the half-size modern 00-gauge, and the invention of diecast toys using in the new alloy, MAZAC.

The metal age was followed after WW2 by the emergence of new plastics, which undercut metal production. Hilary Page's plastic brick design for Kiddicraft was "borrowed" by Lego, Dinky Toys' dominance of the diecast market was undercut by newcomers Corgi and Spot-On, and television and film spin-offs became more lucrative.

The mass-production of plastics and often resulted in an emphasis on lower production costs rather than on design excellence. There were exceptions, but increased internationalisation and a downward pressure on prices meant that a number of the traditional toy companies folded and their brands became passed from company to company. Design decisions were increasingly no longer focused in local workshops or national factories, but with international corporations, whose centralised design meant that toys increasingly became designed for a global market - UK's "Action Man" was a localised version of the American "G.I. Joe" toys, and while the wave of Star Wars merchandise in the 1970s was obviously founded on world-class art and production design, the resulting toys were essentially the same across all international markets.

Plastics were followed by the appearance of embedded electronics, then by video games and home computers and mobile games consoles, then by completely software-based games, and finally (post-2000) by mobile "apps".

While each of these periods has their stand-out examples, finite display space means that the Museum usually focuses on toys and models produced up until about 1955 - this provides the best balance between the proliferation of unsourceable "workshop toys" before 1900, and the strong internationalisation of the toy market that characterised the later Twentieth Century. This period starts when road travel was predominantly by horse, ends in the Atomic Age, and includes two World Wars. It also includes toys that reflected the visionary technological optimism of the 1930s, before this was cruelly cut down by the outbreak of World War Two.

For us, this represents the most individualistic period of toy production, with pieces often hand-engineered by craftsmen and women that tell real stories about social history and change, and design and industrial development, both locally and internationally.

Past events and exhibitions

This category has the following 18 subcategories, out of 18 total.

The following 57 files are in this category, out of 57 total.