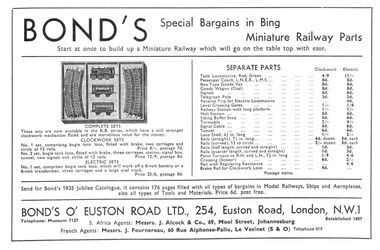 A wallcabinet with a key collection of very early Bing Table Railway sets, made by Bing (and then by Karl Bub), including clockwork and electric versions.

This short-lived collection of "tabletop railway" locomotives, sets and accessories was arguably the world's first commercial 00-gauge model railway system, and and examination of the locomotives' "clunky" bodyshapes shows just how much trouble the designers had miniaturising the larger gauge 0 systems into one eighth of the volume, using the clockwork and electric motors available at the time.

In fact, they didn't quite manage it. The 00-gauge track was half the width of the earlier Gauge 0, and since gauge 0 was 7mm/foot, one might expect the 00-gauge system's vehicles to be 3.5mm/foot. However, as early adopters of the new format, engineer Henry Greenly (working with Bing engineer Oswald Fischer) decided that since they were already pushing the limits of the technology, it made better engineering sense to use more chunky overscale wheels and larger-scale superstructure to provide enough space to cram in the tiny motors, allow sufficient cooling, and allow for more complex detailing and drive gear mechanisms on future locos that would be difficult or impossible to achieve in 3.5mm/foot, given that the wheels needed to be artificially wide for stability.

The Bing table railway system wasn't in production very long - Bing were a victim of the Great Depression and went bust, and although the tooling was taken over by Karl Bub, anti-German sentiment and German inflation meant that Bub were building for the local German market.

However, the Bing Table Railway 4mm scale format, with specifications designed and promoted Greenly, lived on. When Bassett-Lowke had a "second go" at half-scale model railways in the 1930s, they contacted Stefan Bing who now had a company producing Trix construction sets, and persuaded him to resurrect the format. Stefan's company had the services of Fischer and Bassett-Lowke still had Greenly as their engineering consultant, and both companies seem to have decided to go with the old 4mm scale system that they were already familiar with, even though the technology had moved on, and miniaturisation was now easier.

The "Bing Table Railway" design legacy of "clunky wheels" damaged the prospects of the new Trix system, which didn't take advantage of new developments that proved the viability of fine-scale wheels, and helped make the Trix system less compatible with track and points from other manufacturers. However, the Trix TTR system was initially very popular, and with a range of British third-party model railway accessory makers now producing scenery and addons for 4mm scale, when Meccano Ltd. entered the market with Hornby Dublo, they went for 4mm scale too.

With Britain's two main half-scale model railway systems using 4mm/foot, this became the standard scale for British model railways. On the Continent, designers were less emotionally wedded (and less publicly committed) to the arguments for 4mm scale than Greenly and Fischer, and went for the more logical scale of 3.5mm/foot, so that the size of their trains matched the size of the track.

For the history of the Bing (and Bub) Table Railways, see: