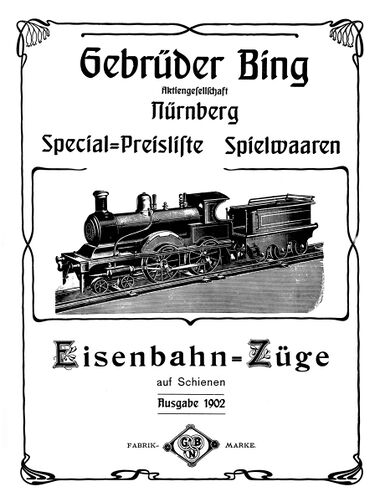 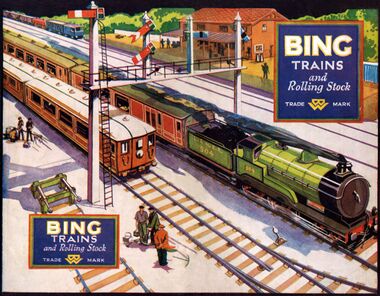 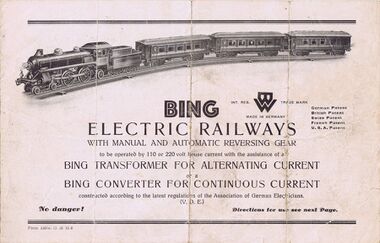 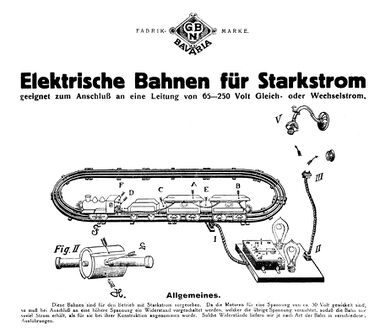 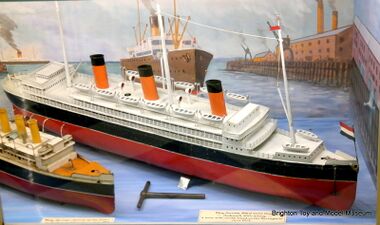 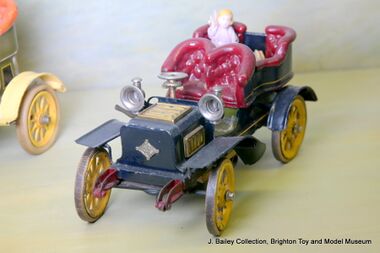 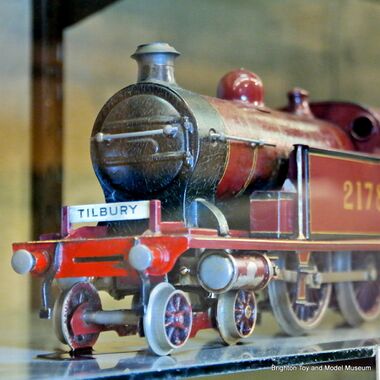 The German toymaker Bing of Nuremberg was founded by Ignaz and Adolf Bing, and started making toys in Nuremburg in the early 1860's, officially incorporating as a manufacturer in 1895. The company grew rapidly between 1895 and 1914, and in the lead-up to WW1, the firm employed over 5000 people.

The company initially went under the name Gebrüder Bing (Bing Brothers) and by the initials GBN (for Gebrüder Bing, Nürnberg), and after the death of Ignaz at around the end of WW1, switched to the name Bing Werke (BW).

Bing was a staggeringly prolific toymaker, and by 1928, it was one of Germany’s leading toy manufacturers, with annual sales of around 27 million Deutschmarks that year. However, the trade depression that resulted in the Wall Street crash proved to be disastrous for Bing, and many of the firm's assets were taken over by Karl Bub, a rival manufacturer.

In the UK, Bing were perhaps best known for their early model railways, and Bing were one of the first companies in the world to produce toy trains that ran on track. Bing's early locomotives were very Germanic-looking, but a meeting in 1900 between W.J. Bassett-Lowke and Stefan Bing resulted in Bassett-Lowke's company importing Bing trains to the UK (repainted in "correct colours" for UK train companies), and also resulted in W.J. producing a design for a more English-looking locomotive for Bing to manufacture.

The close working relationship between the two companies (and exchange of information) continued to develop until it was disrupted by the outbreak of World War One.

After adding teddy bears to its production lines in the early 1900's, Bing soon introduced clockwork mechanisms into these bears, with a wind-up key at the side or front. Soon, rollerskating, somersaulting and "footballer" bears were introduced to Bing’s lines.

Steiff claimed that Bing’s 1910 somersaulting bear copied their 1909 "Purzel-Bär", and the resulting lawsuit lasted for four years (1911-1915). Bing initially used a button-in-ear trademark, but Steiff took action against this, which led to Bing replacing the button with a metal arrow fixed under the ear. This was later replaced by a metal button under the arm – on condition that the word “button” was not used in the trademark.

A similar situation occurred around the same time with Bing's range of dolls, which seemed to be copies of the successful Käthe Kruse dolls – Bing didn't seem to realise that the designs were someone's intellectual property, re-used them, and were then forced legally to back down.

Bing introduced its Miniature Table Railway in 1922, and helped to launch new, smaller "half gauge 0" sized model trains. These models included rolling stock, track and accessories such as signals, signal boxes, level crossings and stations. The first miniature locomotives were driven by clockwork, and by 1925, electric versions were available.

The good working relationship between W.J. Bassett-Lowke and Stefan Bing survived the failure of Gebruder Bing, and when Stefan further developed the idea of half-scale tabletop railways within his own new company, Trix, Bassett-Lowke imported the trains and supplied localised designs and bodyshells for the UK market. With the rise of antisemitism in Germany, Stefan moved to the UK, and the Trix Express range was replaced by the Trix Twin Railway range (TTR), now manufactured in the UK, largely at B-L's Winteringham plant.

Different sources give different dates for the start of the Bing brothers' company. German sources tend to give 1866 as the date of the foundation of Gebruder Bing in Nuremburg, the "Ace Editions" 1906 catalogue reprint says that Bing started in 1863 as retailers, but didn't start manufacturing tin toys until the 1880s.

This category has the following 14 subcategories, out of 14 total.

The following 83 pages are in this category, out of 83 total.

The following 86 files are in this category, out of 86 total.