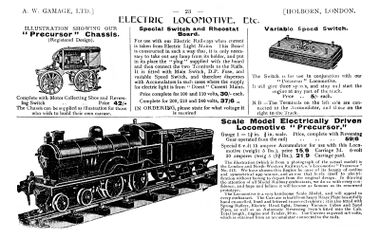 A black clockwork gauge 1 model of an LNWR 4-4-0 Precursor locomotive number 513, with red and gold lining.

The model was made by Bing for Bassett Lowke, circa 1907. 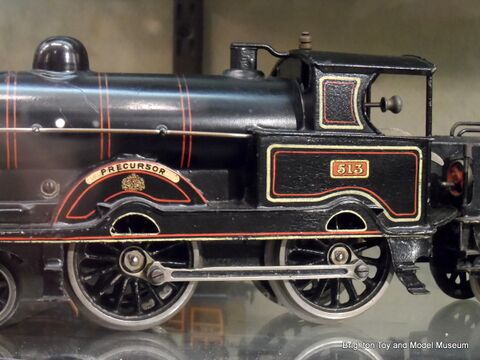 A hundred and thirty of the LNWR Precursor class (designed by James Whale) were produced at Crewe from 1904-1907.

The name of the class is slightly confusing: while the class itself probably wasn't considered to be a "precursor" to anything else, some locomotive designers of the time had a habit of assigning a name to the first locomotive in a class that reflected the fact that it was the first, giving a series of locomotives that had "experimental"-sounding names, which then ended up being assigned to the entire class of locos that followed. As a result, there was more than one loco called "precursor", giving more than one "precursor" class, and also a "precursor-named" tank locomotive class.

The train companies later realised that since the first example of a loco class was usually going to be the example that everyone remembered, it was perhaps not a great idea to keep giving these locos names that essentially meant "prototype" or "experiment" (even if this seemed like good engineering practice), and it soon became best practice to give these "first" locomotives especially grand or patriotic-sounding names that would be more useful for public relations purposes.

The class was replaced by the George the Fifth Class in 1910, which was famous for popularising superheating. The Georges were based on the Precursors, and looked very similar - the main difference being that the Precursors had a squarish box under the cab and a single curved splashplate over the front drivewheels, whereas the Georges extended the top surface of the top of the splashplate all the way back to the cab box. After the success of the Georges, many of the Precursors' boilers were retrofitted with superheating.