A black clockwork gauge 0 LNWR 4-4-0 George the Fifth locomotive, number 2663, made by Bing for Bassett Lowke in ~1912. It’s kept shelved below the main gauge 0 layout, visible from the back of the Museum.

This is the rarer and more desirable "deluxe" version of the model with an all-soldered no-tabs" construction.

Locomotives in the "George the Fifth" Class (of which, 2663 George the Fifth was the first) were numbered rather oddly, as the LNWR used to reuse old numbers as their older locos were decommissioned. Number 2663 ran from 1910 to 1936, being renumbered when LMS absorbed LNWR. 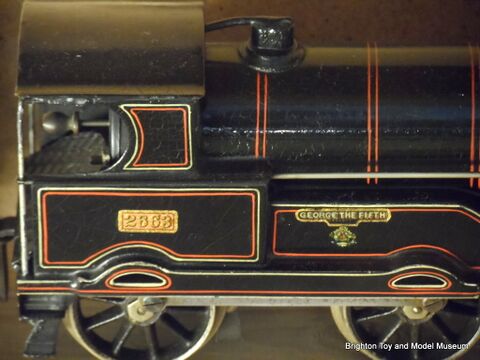 George the Fifth locomotive, LNWR 2663, Bing for Bassett-Lowke, side detail