From The Brighton Toy and Model Index
(Redirected from Steiff)
Jump to:navigation, search 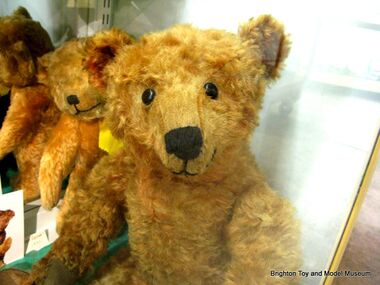 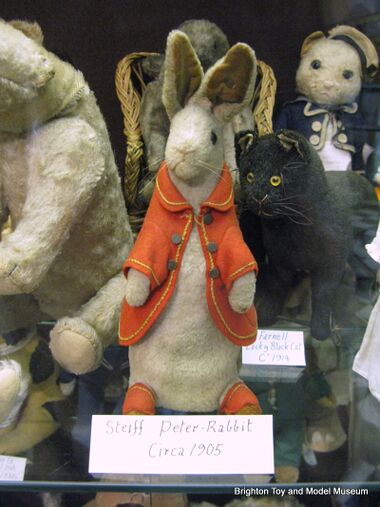 Steiff are probably the world's most famous manufacturer of soft toys and teddybears, with some early rare Steiff pieces now fetching six-figure sums at auction. Steiff also have a claim to being one of the key participants in the invention and popularisation of the modern "teddy".

At 18 months old, Margarete Steiff (24 July 1847 - May 9, 1909) suffered a high fever and as a result her legs became paralysed and it was painful to use her right arm. Three years later, she was diagnosed with polio, and all attempts at finding a cure were unsuccessful. However, despite this, Margarete strove to lead a normal life. In spite of the pain in her right hand, Margarete took sewing lessons, and at the age of 17, she finally completed her training as a seamstress. She started working part-time in a shop owned by her sisters, Marie and Pauline, and when they left their home town some 8 years later, Margarete continued to run the store on her own.

From her first earnings, Margarete bought a sewing machine, and in 1877, she opened a ready-to-wear felt clothing business. Shortly after the founding of her business, she sewed a pincushion shaped like a small elephant, named "Elefäntle", which was based on a pattern she found in an issue of "Modenwelt" magazine. These small fabric animals proved to be very popular, and in 1880, Margarete Steiff GmbH was officially founded, with the Elefäntle being the company’s first big-selling product.

In 1890, Margarete's brother Fritz built her a house with a small shop on the ground floor, and the street on which this house was built is still known as "Margarete-Steiff-Strasse” today.

The trademark "Steiff - Button in Ear" was developed by one of Margarete's nephews, Franz Steiff, in 1902. The aim of this trademark was to distinguish the Steiff products from cheap imitations. The "button in ear" idea was copied by several other bear companies who were eventually forced to comply with legal demands to stop.

Steiff and the Genesis of the Teddy Bear

Another of Margarete's nephews, Richard Steiff, made detailed drawings of zoo animals (including bears), which were modified to produce designs suitable for the Steiff range. This was the key to their success! After US President Teddy Rooseveldt had been cartooned refusing to shoot a baby bear, a buyer from New York spotted Steiff's initial batch of toy bears at the 1903 Leipzig Toy Fair and bought all of them, and ordered another 3,000 bears to sell in his department store.

Steiff made about 975,000 bears each year. Other manufacturers tried to emulate Steiff's success, but the Steiff name remains associated with top-quality bears.