The gauge 3 LNWR Black Prince locomotive was the first fruit of a meeting between W.J. Bassett-Lowke and Stefan Bing at the 1900 Paris Exhibition. Having just set up his company selling mail-order model engineering parts (in ~1899), WJ went to France to visit the exhibition and look for new lines. Enthralled by the German locomotives on show, WJ spoke to Stefan Bing about the possibility of a locomotive designed after an English prototype (rather than a continental outline), and Bing's 1902 "Black Prince" was the result, designed by WJcredited as being the first continental model train with cast parts designed after an English locomotive.

The Midland Railway version of the Black Prince (numbered 2631) became a staple of the early Bassett-Lowke range up until the outbreak of World War One, being improved and having "spin-off" versions also released in gauge 2, gauge 1 and gauge 0, and in line with B-L's emphasis on model engineering, the company also sold the plans and castings for the Black Prince so that modelmakers could build a version of the piece themselves.

Lineart of the Black Prince locomotive, cropped from the cover of a reproduction 1902 Bing catalogue. Note the change in valvework. 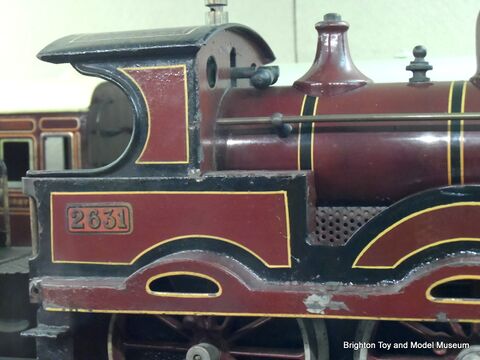