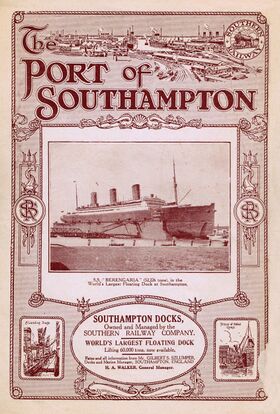 A gloriously large (100cm) clockwork third-series three-funnel ocean liner loosely based on the Imperator / RMS Berengaria, made by Bing, Germany, circa 1923. The ship is displayed next to its huge clockwork winding key, and appears to have shed some of its original rigging (compared to the catalogue image).

Since this is a "working" toy ship with a functional clockwork-driven propellor, one can imagine the difficulty in manhandling such a large and bulky piece to the nearest boating pond – assuming that this isn't a version issued by Bing with with simplified rigging, it's not difficult to imagine an owner removing some of the "strings" in order to have a sporting chance of putting their arm around the ship without damaging anything. Otherwise, carrying the ship safely would probably be a job requiring two people, or a trolley. 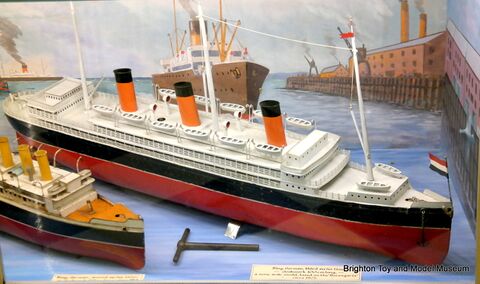 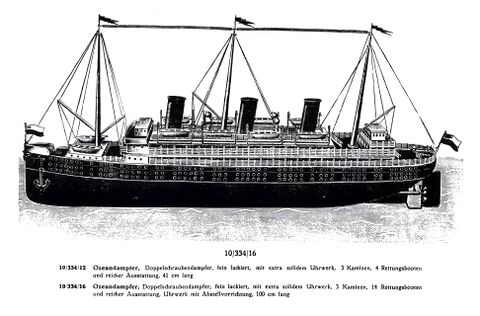 The ship started out in life as the Imperator, built in Germany and embarking on its maiden voyage in 1912. After the First World War (1914-18), the Imperator was seized an put into service as a troop ship, after which it was handed to Cunard as a reparation and replacement for their sunk liner, Lusitania.

Originally entering Cunard service still as the Imperator, it was felt that as a high-prestige ship, it would be less awkward if the company changed the ship's name, and it became the Berengaria.

A series of fires from 1936 onwards caused by faulty wiring caused serious damage, and doubts over whether the ship could be recertified without yet more overhauling led to its decommissioning and scrapping in 1938.