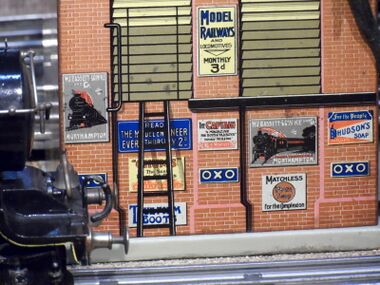 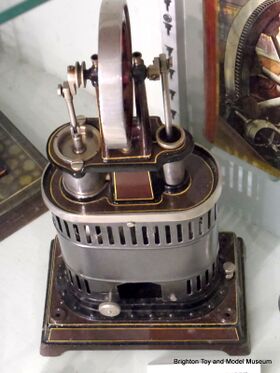 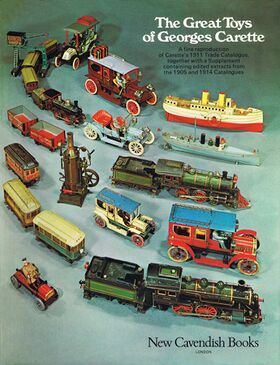 Georges Carette (1861-1954) moved from France to Germany in the late C19th, and founded his company Georges Carette & Cie. in the toymaking region of Nuremberg.

The "Carette" name is probably best known in the UK for the gauge 0 coaches that Carette made for Bassett-Lowke.

Carette's original company was co-founded with the Bing brothers Ignaz and Adolf in 1886, with the idea being that the company would work exclusively as a supplier and contractor for Bing. The company had a substantial workforce and factory at Schillerstrasse 5 , Nuremburg producing pieces for Bing in a wide range of materials.

This original company was dissolved after about ten years (in ~1895), with Ignaz and Adolf pulling out, and a new company was formed with just Georges in control. Since the original company wasn't really an independent manufacturer, and was essentially a fabrication house for Bing, it tends to be ignored.

When we think of "Georges Carette et Cie", we normally think of this "new" independent company founded in the mid-1890s. The new business produced a range of then-fashionable metal toys such as magic lanterns (not surprisingly, given their "Bing" background) but specialised in products fabricated from lithographed metal sheet. A shop was also opened in 1896 as a partnership between Georges Carette and Paul Joseph Thal, and with the exception of the factory burning down in 1903, the company seemed to be on a positive track. Carette got a British patent for an improved gear slide for model locomotives, litho'ed tinplate model locomotives were followed by more substantial steam-powered models, and Georges struck up a working relationship with Bassett-Lowke to supply models designed for the British market.

Carette's status as a French national became a problem with the outbreak of World War One in 1914. As a foreigner living in Germany and owning a factory, his assets were liable to be seized, and the factory was put into administration in 1914, with Friedrich Pergher put in charge. Georges and his wife found it advisable to leave Germany and head back to France, and further wartime legislation resulted in an order in 1916 for the company to be liquidated. By 1918, the company's status was "in liquidation".

With the selling-off of the company's assets, the tooling and designs for the British-style locos and carriages was bought by Bassett-Lowke, who then continued selling essentially the same Carette range that they'd previously been importing, but making them themselves using the Carette tooling, in Britain.

The "Continental" model railway-related assets were acquired by Karl Bub.

The physical lines of Carette's pieces are often noticeably more elegant (and perhaps more sophisticated) than those of the company's Nuremburg neighbours - Carette's stationary steam engines often had cleaner lines and were unafraid to use simple cylinders and shapes, in cases where the prevailing Nuremberg style would have tended to treat a large unadorned area as something that required knobs or additional cast detailing. Carette's turn-of the century pieces had a less "Gothic" look to them, and it's interesting tocompare the museum's Carette Stirling Single locomotive, which celebrates the clean lines and styling of the original locomotive with its contemporary "Bing for Bassett-Lowke" "Black Prince" loco, which has more "lumpy" shape and "piecrust" styling

Chromolithography was the Victorian predecessor of modern "offset litho" printing, and was often used for high-quality colour illustrations in children's books, and for art prints. Unlike modern offset litho, which is a mechanical four-colour process that splits an image into four separate "dotty" colour separations for Cyan, Magenta, Yellow and Black ink ("CMYK"), with positional offsets to allow all four colours to be printed on the same sheet, the original method involved artists starting with whichever combination of inks they wanted, and then drawing the required lines and stippled dots by hand for each type of ink that they wanted to use or overlay. This printing system allowed more impressive results than the (faster and cheaper) mechanistic system that replaced it - an "offset litho" reproduction of a landscape painting would have to try to use a "CYMK" approximation of the colours used, and might show crude artefacts, whereas an artist-produced chromolithograph might use ten or more layers, with a colour palette of inks individually selected by the lithographer to produce the best match and gradation to the colours used in the original - the chromolithography might even use dedicated inks that matched the original paint colours used by the original artist, in which case the repro artist was essentially recreating the original work, perhaps in a more painstaking and technically adept manner than the original artist, since the original painter had the luxury of hand-mixing colours, whereas the litho artist had to analyse and then recreate the same gradations using fine stippling. The downside of using these hand-created lithographic prints was that it might take a highly skilled artist three months to create and then fine-tune a set of blocks or plates that could recreate a painting in lithographic form.

At its simplest, chromolithography might just use a set of solid colour blocks and lines printed onto a metal sheet with a given choice of colours. At its best, the process could replicate the finest hand-painting techniques - the only limitation being that the printing had to be done on a flat surface. A great example of the heights that Carette could achieve with the process can be seen on the two Carette water-towers in the museum - when looking at these pieces, it's difficult to remind oneself (until one looks down at the base) that ALL the front detail on the towers is fake - the recessed shutters, front ladder and buttressed brickwork complete with highlights and shadowing are all printed onto a simple flat surface. Even the advertising posters apparently plastered over the tower aren't really "applied" - they are part of the original printing, complete with tiny drop-shadows.

The Carette factory was justifiably proud of the range of printing processes that they had mastered for applying to tinplate, and Carette's "printed tin" pieces are often notable for their bright colours and the amount of sharp detail. Sometimes this was sophisticated and restrained (such as on the rich blue Cardean loco), and sometimes, when a more toyish look was required, it could be used to produce a cartoonish level of overdetailing that made one forget that the physical shape of the toy was actually quite primitive.

The following 41 pages are in this category, out of 41 total.