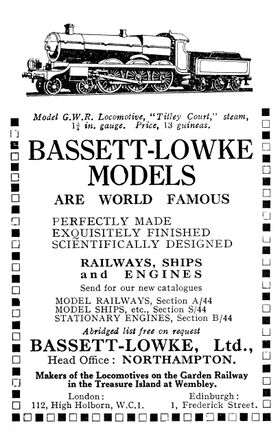 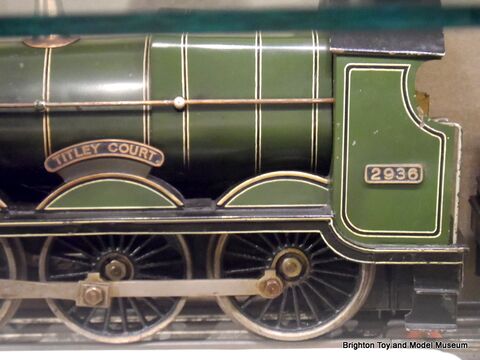 Loco cab and side detail 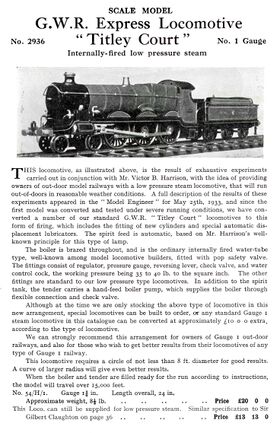 " THIS locomotive, as illustrated above, is the result of exhaustive experiments carried out in conjunction with Mr. Victor B. Harrison, with the idea of providing owners of out-door model railways with a low pressure steam locomotive, that will run out-of-doors in reasonable weather conditions. A full description of the results of these experiments appeared in the "Model Engineer" for May 25th, 1933, and since the first model was converted and tested under severe running conditions, we have converted a number of our standard G.W.R. "Titley Court" locomotives to this form of firing, which includes the fitting of new cylinders and special automatic displacement lubricators. The spirit feed is automatic, based on Mr. Harrison's well-known principle for this type of lamp.
The boiler is brazed throughout, and is the ordinary internally fired water-tube type, well-known among model locomotive builders, fitted with pop safety valve. The fittings consist of regulator, pressure gauge, reversing lever, check valve, and water control cock, the working pressure being 35 to 40 lb. to the square inch. The other fittings are standard to our low pressure type locomotives. In addition to the spirit tank, the tender carries a hand-feed boiler pump, which supplies the boiler through flexible connection and check valve.
Although at the time we are only stocking the above type of locomotive in this new arrangement, special locomotives can be built to order, or any standard Gauge 1 steam locomotive in this catalogue can be converted at approximately £10 0 0 extra, according to the type of locomotive.
We can strongly recommend this arrangement for owners of Gauge 1 out-door railways, and also for those who wish to get better results from their locomotives of any type of Gauge 1 railway.
This locomotive requires a circle of not less than 8 ft. diameter for good results. A curve of larger radius will give even better results.
When the boiler and tender are filled ready for the run according to instructions, the model will travel over 15,000 feet.
No. 54/H/1. Gauge 1 3/4in. Length overall, 24 in.
Approximate weight, 8 1/2 lb. . . . Price £20 0 0
This Loco. can still be supplied for low pressure steam. Similar specification to Sir Gilbert Claughton on page 36 . . . Price £13 13 0 "

Although this is recognisably a GWR 2900-Class (or "Saint-Class") locomotive, "Titley Court" is listed as having carried the number 2953, with 2936 listed as carrying the name "Cefntilla Court".

After three prototypes in 1902/3, more then seventy more locos of the class were built from 1905 to 1913, with various configurations

Most of the earlier locos were named after "Ladies" and Saints, then fictional characters and their books ("Talisman", "Robin Hood"), and then named after Courts.