The Bing British brandname was used in the early 1930s for a small range of toys, apparently limited to film projectors and model speedboats. Although very little is known about the brand, it is assumed to have been used by Stefan Bing, perhaps with his son Franz Bing, who had been sent to England (in 1932?) to look after Trix Ltd. in the UK. Stefan arrived in the UK shortly afterwards, escaping from Nazi Germany to set up again as a toymaker in Britain.

"Bing British" products were distributed in the UK by Leon Rees, who might also have had a financial interest in the company.

We know of two adverts for the speedboats, which both appeared in Hobbies Weekly during 1932.

1932 was also the year that Hobbies Weekly started including its Trix Supplement in each issue, and the year in which the magazine started to have a strong focus on Trix construction sets, and also a sudden rash of advertising and articles related to Bassett-Lowke Ltd. The Trix construction sets had been the brainchild of Stefan Bing while in Germany, where he'd set up the original Trix company, which then spawned a UK offshoot. W.J. Bassett-Lowke had contacted Stefan about the idea of producing a successor to the old 1920s Bing Table Railway system, and the companies had cooperated in creating the Trix TTR 00-gauge model railway range. With Stefan's escape to Britain, "Trix" trains for the British market were largely produced at Bassett-Lowke's associated Winteringham Ltd. factory, and were mostly sold through Bassett-Lowke, who liked to brand them as Bassett-Lowke products.

There seems to have been a power-struggle between Stefan and WJ over control of the brand, with W.J. trying to have TTR redefined as "Twin Table Railway" to dilute the strength of its "Trix" branding, and with Stefan apparently trying to have as much TTR manufacturing as possible carried out at plants other than Winteringham Ltd., to try to reduce the company's reliance and dependency on Bassett-Lowke.

With all of this going on, it seems likely that "Bing British" may have been Stefan's attempt to create a new brand and a new company over which he still had total control, with no restrictive preexisting manufacturing or distribution agreements.

Some of the "Bing British" projectors may or may not have been made for BB by Construments Ltd. We don't currently have information on where the boats may have been built. 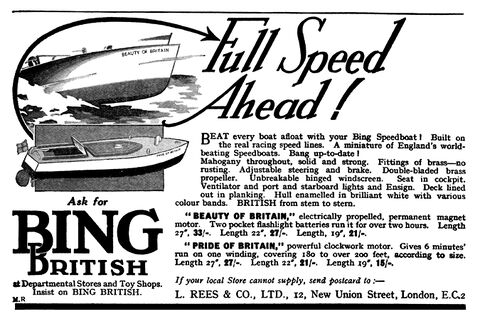 BEAT every boat afloat with your Bing Speedboat! Built on the real racing speed lines. A miniature of England's world-beating Speedboats. Bang up-to-date!

Mahogany throughout, solid and Strong. Fittings of brass – no rusting. Adjustable steering and brake. Double-bladed brass propellor. Unbreakable hinged windscreen. Seat in cockpit. Ventilator and port and starboard lights and Ensign. Deck lined out in planking. Hull enamelled in brilliant white with various colour bands. BRITISH from stem to stern.