A lovely gauge 1 brown, cream and gold Great Central Railway clerestory-windowed Corridor Coach, made by Bing for Bassett-Lowke in around ~1904.

The coach was produced as a specially commissioned batch, along with a clockwork 4-4-0 "Sir Alexander" gauge 1 locomotive, for the Great Central Railway to offer as competition prizes to customers (with the locomotives and coaches also available for sale). The coach is displayed behind the "Alexander" locomotive that we acquired in 2015. 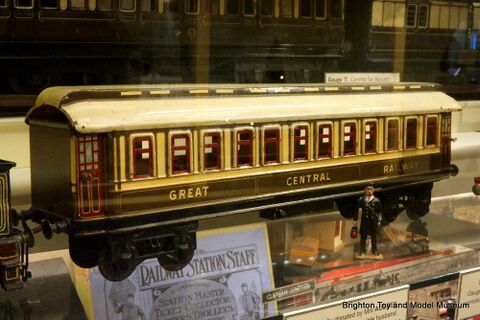 As a specially commissioned model, the locomotive and coach set was arguably a landmarks in the development of Bassett-Lowke's business, and the development of the model railway hobby in Britain. Thanks to the GCR's guaranteed purchase, Bassett-Lowke were able to give Bing a quantity order that otherwise might have seemed risky, with the GCR effectively subsidising and promoting the new B-L product.

Although B-L's catalogue was by this time already quite sizable, the purchase would also have demonstrated ton Bing the value of their partnership with the fledgeling Bassett-Lowke company. Although Bing did also try to import and sell directly into the UK market themselves, the GCR deal showed the importance of B-L's local knowledge and contacts. 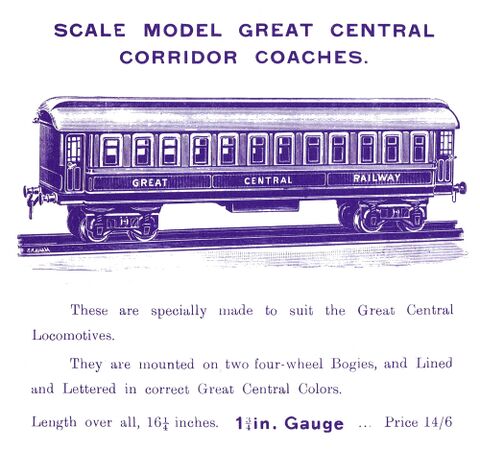 1904 catalogue image for the coach

The coach was kindly purchased and donated to the museum by Mrs Audrey Gilkes, in memory of her late husband Michael Gilkes, who was a founding Trustee of the museum.