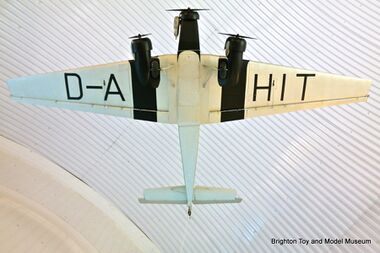 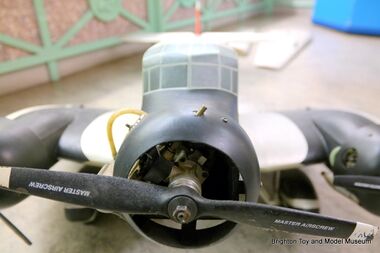 The front of the JU52 model, showing the nose engine [image info] 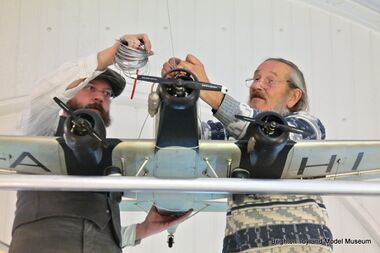 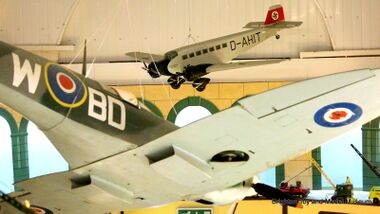 Installed overhead in the museum lobby, where it's being engaged by two Spitfires [image info]

The model is due to go on display in January 2016 as one of the museum's new set of 25th anniversary exhibits, suspended overhead in the museum lobby and being attacked by the museum's two large overhead Spitfires.

The 1931 Junkers Ju-52 was originally intended to be a single-engine aircraft, but poor performance, not helped by the additional drag of its unusual corrugated skin, meant that from 1932, the planes ended up being fitted with an additional two wing-mounted engines (gaining the suffix "3m"), which solved the problem, boosting the plane's power-to-weight ratio by a factor of around 1.7. With its three engines, the Ju52 was now a very useful passenger/cargo plane, to the extent that both Hitler and Goering adopted JU52's as their personal aircraft.

With the advent of World War 2, the Luftwaffe used the Ju52 as a transport plane.

Although it was never an especially sleek aircraft, this also meant that, never having had particularly fashionable look, or having used any especially date-specific technologies or construction methods, the "thrown-together" design also didn't really "date", and JU52's continued to be built right up until 1952, with some staying in service until the 1980s. Significant numbers of JU-52's are still out there in airworthy condition, and some can be chartered for tourist flights.

Not to be confused with...

... Hermann Goering's transport plane, another Ju52 that carried the D-AHIT registration, but which was called "Manfred von Richthofen", and crashed in 1943.