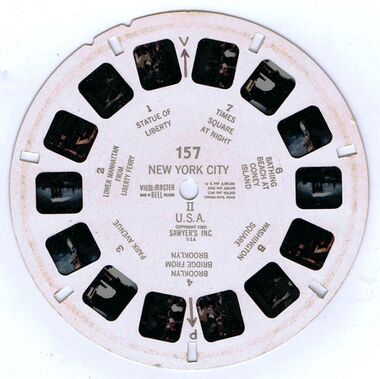 The View-Master 3D slide viewer was originally produced in the late 1930s, with it's disc-based format used as a way of delivering 3D slide views of tourist scenes. It was later used by the US military as a training tool, and a bright red thermoplastic version was heavily promoted in the 1970s as a toy, with slides of film and tv scenes.

In 2015 it was announced that the View-Master brandname would be used on a new range of virtual reality (VR) headsets, in conjunction with Google.

Sawyer's Inc. was founded in 1914 by Carleton Sawyer and A. R. Specht as a photo-finishing business, the idea being that since Specht was in local management at the Owl Drug Company chain, Sawyers would be able to capitalise on this and supply photo services through local Owl stores (this convergence between drugstores and photofinishing services was also successful for "Boots the Chemist" in the UK, which still offer photo printing as a service).

Photography enthusiast Ed Mayer bought into the company in 1919, having finished his military service in WW1. Ed was looking for a career, and managed to scrape together enough money from family members to buy out Sawyer's stake.

Harold Graves joined the company in 1926 to handle marketing and the business grew, branching out into the production of scenic postcards.

With the appearance of Eastman Kodak's new 16mm three-colour Kodachrome colour film in 1935, Mayer decided that this created the opportunity to create a brand new type of product to supplement the existing "scenery postcards" range – Kodak's 16mm cine film was priced with amateur and home moviemakers in mind, so the price per still frame was low – with a sufficiently affordable viewer, with a lens for each eye, users would be able to view the transparencies using natural light via a diffuser, and if the viewer could show pairs of images, one per eye, the result could be an updated version of the old 3D novelty slide viewers that had played such a large part in the catalogues of the big German toy and novelty manufacturers such as Bing.

Sawyer's understood that they could reinvent the old 3D viewer business model by having a small, lightweight plastic viewer, with cheap-to-produce slides, supported by and their experience of the postcard photography business. Once someone had purchased a viewer they would be able to see sights from around the world in 3D as a sort of "remote tourism", and would have an appetite for buying further slides, which Sawyer's would be only to keen to supply to them. What was needed was an foolproof and well-designed viewer and simple and appealing way of encapsulating the slides.

In 1938, Graves met William Gruber, another keen photographer who had experimented with 3D photography, but also had a background in engineering and design, having worked with organs and player pianos at Welte & Sons, Germany.

Gruber designed and refined the distinctively original-looking View-Master design in 1938/39, and the new product was launched at the 1939 New York World's Fair. Gruber worked out that the size of the 16mm film images, combined with human eye-spacing, allowed a set of 14 images to be arranged in a ring, sandwiched between two card disks, providing seven stereo pairs of images. Instead of fiddly individual slides, customers could buy a simple disk with a set of seven stereo images, drop it into the viewer, and step through the image pairs by pressing a lever which engaged with locator holes near the edge of the disk. The use of the locator holes ensured that the images were always viewed perfectly aligned, and that the disc would always skip past the other seven possible intermediate positions that would otherwise show images upside-down. A small central window above the eyepieces revealed a printed section of the card disc with text describing the current stereo scene.

While its was still possible to insert the disc back-to-front (with no text visible at the caption window), the device was almost foolproof to use, and could be played with by small children. To this end, later 1970s versions of the View-Master were produced in toyish bright red and bundled with cartoon images. The earlier models tended to be aimed more at adults, and had more expensive-and tasteful-looking finishes, including a rather nice mottled fake mahogany-style version.

The Viewmaster was originally made from Tenite, a form of cellulose acetate supplied by Eastman Chemical, a company set up by George Eastman to provide a steady supply of the chemicals needed by Eastman Kodak, but which also supplied other businesses. Later models were made from Bakelite, and later still production switched to more modern thermoplastics.

The following 17 pages are in this category, out of 17 total.