From The Brighton Toy and Model Index
(Redirected from Micromodels)
Jump to:navigation, search 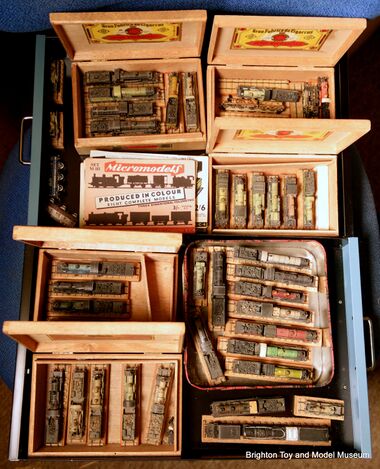 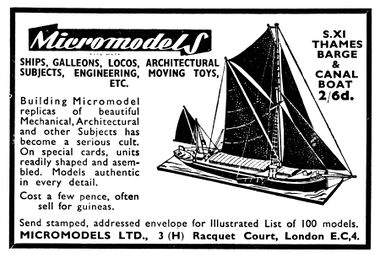 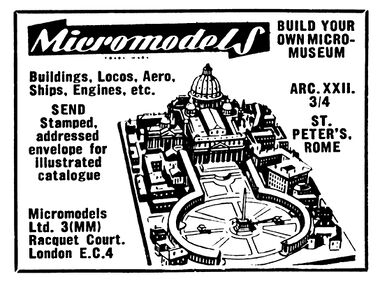 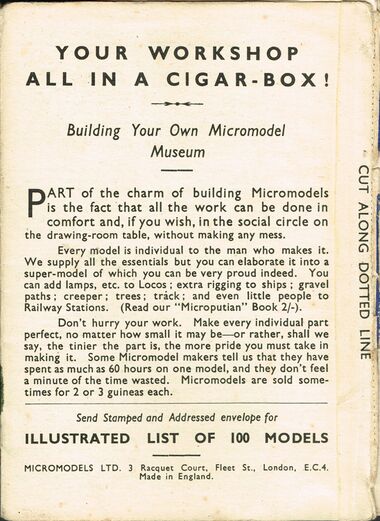 "Your Workshop in a Cigar-Box [image info] 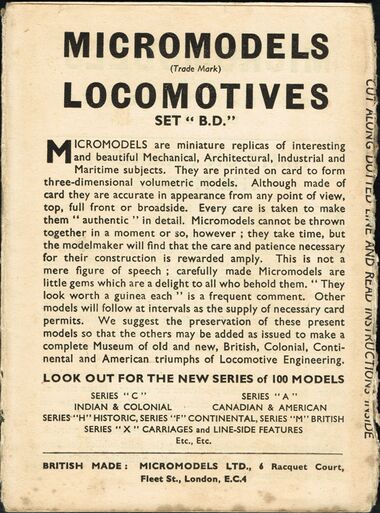 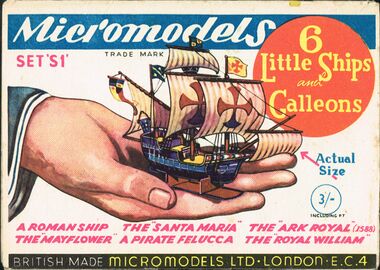 Micromodels are intricately detailed "3D Volumetric" card models designed by Geoffrey Heighway (1884-1959), initially when he was working for Modelcraft Ltd. in London.

Micromodels did especially well during WW2 and during the austerity period afterwards, when people were looking for inexpensive hobbies and some other other modelmaking materials (like metal) were restricted. The "small postcard"-sized packs could be kept in a cigarbox along with all necessary tools, and the box could also hold the growing model, and ensure that it wasn't accidentally swept aside or sat on. During the war, it was even suggested that people could bring their Micromodels cigarboxes down with them into the air raid shelters during a raid, and use them to while away the time waiting for the "all clear". 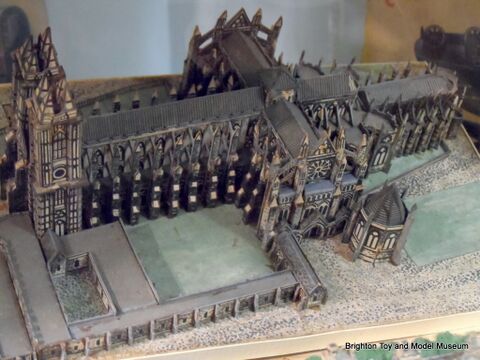 At various times, some of the designs were issued as packs of postcards, printed on the back of Weetabix packets, and/or reissued as compilations in book form.

YOUR WORKSHOP ALL IN A CIGAR-BOX!

Building Your Own Micromodel Museum

Part of the charm of building Micromodels is the fact that all the work can be done in comfort, and if you wish, in the social circle of the drawing-room table, without making any mess.

Every model is individual to the man who makes it. We supply the essentials but you can elaborate it into a super-model of which you can be very proud indeed. You can add lamps, etc. to Locos; extra rigging to ships; gravel paths; creeper; trees; track; and even little people to Railway Stations.

Don't hurry your work. Make every individual part perfect, no matter how small it may be – or rather, shall we say, the tinier the part is, the more pride you must take in making it. Some Micromodel makers tell us that they have spent as much as 60 hours on one model, and they don't feel a minute of the time wasted. Micromodels are sold sometimes for 2 or 3 guineas each.

talk of card shortages suggests that this was written during or just after WW2:

MICROMODELS are miniature replicas of interesting and beautiful Mechanical, Architectural, Industrial and Maritime subjects. They are printe don card to form three-dimensional volumetric objects. Although mad eof card they are accurate in appearance from any point of view, top, full front or broadside. Every care is taken to make them "authentic" in detail. Micromodels cannot be thrown together in a moment or so, however; they take time, but the modelmaker will find that the care and patience necessarly for their construction is rewarded amply. This is not a mere figure of speech; carefully made Micromodels are little gems which are a delight to all who behold them. "They look worth a guinea each" is a frequent comment. Other models will follow at intervals as the supply of necessary card permits. We suggest the preservation of these present models so that other may be added as issued to make a complete Museum of old and new, British, Colonial, Continental and American triumphs of locomotive engineering.

Look out for the new series of 100 models

Some of the following notes and suggestions are general and may not apply specifically to the particular model you are now about to make. They are given for the assistance of those who for the first time are approaching this absorbing life-long hobby of Micromodel making. Specific instructions where necessary are given on individual cards.