A radio-controlled model of an Italian trimotor Savoia-Marchetti SM81 Pipistrello airplane. It's displayed overhead in Arch Two, near Puppet Corner. 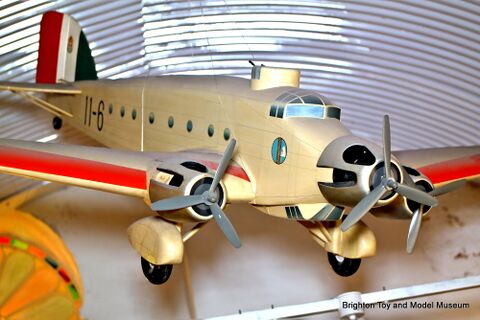 The Savoia-Marchetti SM.81 Pipistrello (Italian for "bat") bomber and military transport aircraft appeared in 1935, and participated in Italian conflicts in 1935/36, and then World War Two from 1939 onwards.

Adapted from a commercial SM passenger plane design, the Pipistrello was an adaptable workhorse (comparisons might be drawn with the American DC-10), and although it wasn't as fast as other planes that were in service by WW2, a number of Pipistrellos survived the war and remained useful planes afterwards.