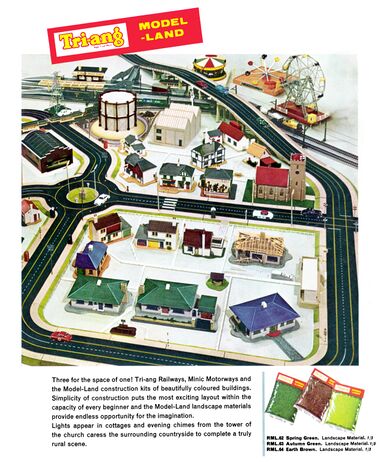 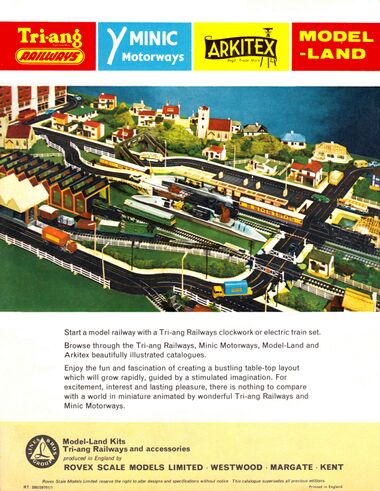 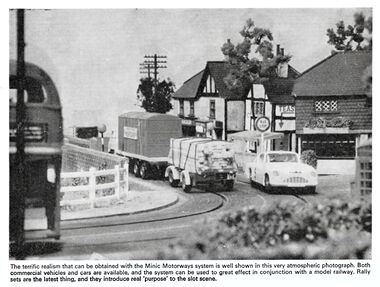 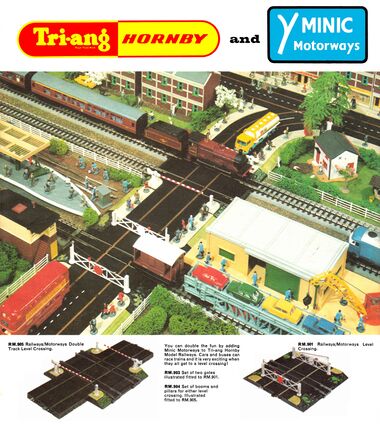 Tri-ang's Minic Motorways slotcar system appeared in the early 1960s. A critical distinguishing feature of the system to most alternatives was that it was designed to 1:76 scale, for interoperability with the company's successful Tri-ang Railways range. While most slotcar systems were designed and marketed as toy racetracks, the Minic Motorways system was designed to allow model railway layouts to incorporate moving road traffic, and around more model-railway-like design sensibilities.

Early advertising was admittedly crude, and seemed to market the system as an exciting way of having a barebones model railway loop and grey slotcar road loop intersecting, with the constant danger of having your car hit by a freight train (unless you were careful). However, the system rapidly expanded, with clip-on pavements and grass verges allowing it to coexist more politely with "proper" model railway layouts, and with level crossings and "intersection logic" to prevent cars and trains hitting each other. One could watch the surreal sight of cars approaching a level crossing, and apparently seeing the approaching train and pausing until it was safe to cross, then continuing. This gave a layout's behaviour a far greater sense of sophistication – one could almost imagine the little drivers inside the cars tut-tutting as they waited for the train to pass before impatiently scooting off again.

Off to a Racing Start ... and Ahead in Every Direction, with Tri-ang MINIC Motorways

Every Minic Motorways Set holds the promise of a young lifetime of pride and pleasure in building the world's finest 00 scale motorway system. As you will see in the ensuing pages a wide variety of tough track sections clip quickly and firmly together without the aid of tools or locking devices.

Racing circuits of any size and contour can easily be assembled ready for dashing sports cars to fight their exciting way to the chequered flag.

Beautifully detailed cars and commercial vehicles can be driven at varying speeds forward and in reverse – just like the real thing!

Build in your Tri-ang Railways, too! Level crossings, road/rail junctions, the incredible car transporter and loading ramp set a new high standard in fun and authenticity.

In addition, the models of modern buildings, which can be seen on pages 18 and 19, will complete the realism of any chosen layout.

All models are designed to operate from 12/15 colts D.C. (Direct Current). For operating from A.C. mains electricity supply a suitable power controller having an output of 12/15 volts D.C. is required. For battery operation a battery container and three 4½ V. dry batteries are required.

For simplicity, versatility and durability Minic Motorways have no equal.

The Minic Motorways range expanded again with a range of roadside buildings with "added value" features such as smoking chimneys and automatically opening garage doors, and were supplemented by the Tri-Ang Model-Land range of pre-coloured (but paintable) plastic kits of buildings and sets of paintable people. Level crossings had flashing beacons, crossroad intersections had mutual cutouts to auto-pause traffic, some road sections had railway tracks as well, and you could even drive your car right onto a road or railway car transporter, or straight onto a car ferry. More complicated road junctions (including a four-way roundabout) allowed you to switch the default behaviour of a car approaching a "fork", to roadway systems with really quite complex paths.

The system was then promoted as also compatible with the 00-scale sub-range of the Tri-ang Spot-On Arkitex building kits which allowed faithful recreations of 1960s office buildings, and of course, one also had the range of railway station and trackside buildings in the Tri-ang Railways range to play with (it would be natural for a large station or a goodsyard to have a road alongside).

With the takeover by Tri-ang of Meccano Ltd, and the incorporation of some parts of the Dublo range into the new merged Tri-ang Hornby system, advertising showed layouts built of a mixture of Minic Motorways and Tri-ang Hornby buildings.

The idea of a realistic combined road and railway layout was reflected in the wide range of vehicles available: While Minic Motorways did include a few sports cars, some in racing colours (and a Police Car with flashing lights), it also included coaches, double decker buses, lorries, a steam lorry issuing real smoke, and a tank. Given that tank racing wasn't a popular pastime, it was pretty obvious that this wasn't a system designed primarily for racing.

While there were undoubtedly some hobbyists out there who loved the ability to use these complementary ranges of pre-built and kit scenery to construct their own massive animated cityscapes. It must have occurred to Lines Brothers Ltd that they now had an excessively large range, and that actually, what most people bought slotcars for was to make a simple figure-eight track and race cars against their friends and family members – the slotcar race set was a classic family "Christmas tree" toy that allowed the whole family to spend Boxing Day sitting on the lounge floor and playing racecars. This was not the same market as the solitary hobbyist diorama constructor.

Minic Motorways had the wrong name. Although the opening of the UK's first motorway (the M1) in the late 1950s had lent an air of glamour and zeitgeist to the word "motorway", motorways themselves tended to be straight and fairly uninteresting creatures, urban cityscapes weren't technically motorways, and someone wanting to buy a slotcar racing set might not be excited by the rather staid "Minic Motorway" branding. The product line simply had the wrong name for the "racetrack" market, and although Lines Brothers had recently bought the significantly larger 1:32-scale Scalextric system to address that market, Minic Motorways also needed to sell into the racing market to maintain "critical mass".

Triang's new advertising no longer promoted urban realism so much, and concentrated on racing excitement, and with a respectable range of racetrack accessories (including a Dunlop bridge and various racetrack buildings, and a thorough range of layout designs to emulate famous racetracks), the company started using three different branding variations: Minic Motorways, Minic Motor Racing, and Minic Rally Racing. However, this more focused sub-branding perhaps appeared a little later than it should have, by which time the company was bogged down with trying to merge the Tri-ang and Meccano Ltd ranges, and a few short years later the whole Lines Brothers behemoth went bust and were bought by the Airfix group.

These takeovers would have resulted in a rather absurd range of different incompatible slotcar systems all "under the same roof" – Minic Motorways (Tri-ang, in-house), Scalextric (Tri-ang, bought from Minimodels Ltd), Formula 152 (Wrenn, which Triang had bought a major stake in), Circuit 24 (Meccano Ltd, big in France) and then Airfix's own system Airfix MotorAce / Airfix MRRC (developed by MRRC, which Airfix had taken over).

In the resulting shakedown, Formula 152 disappeared when Triang bought into Wrenn, MRRC were floated off as a separate company, and Minic Motorways became an almost inevitable casualty of the glut of incompatible systems.

The disappearance of so many systems meant that slotcars became again primarily something that you bought at Christmas as a single set, then threw away when something (inevitably) broke. Tragically, the slotcar community had never standardised on interchangeable parts and accessories as the model railway community had, and although cars could often be modified to run on a different system's track, the profusion of incompatible track spacings and connection systems made investing serious money in a roadway system rather risky. If a company decided to "pull the plug" on a system (as happened to Minic Motorways), you couldn't simply buy compatible track (and fencing, etc) from a different manufacturer, and were reliant of the limited number of accessory parts already in existence, and on the second-hand market. The large number of almost compatible proprietary formats "split the market", and made it uneconomical for anyone other then the smallest of niche makers to support other company's current or obsolete ranges.