From The Brighton Toy and Model Index
(Redirected from Arkitex)
Jump to:navigation, search 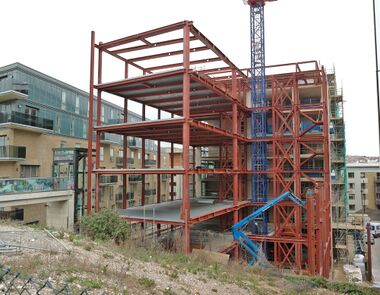 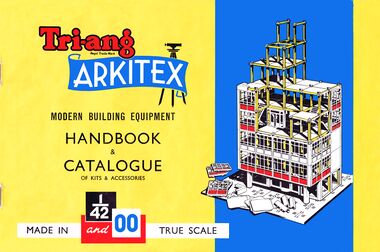 1961: Tri-ang Arkitex, Modern Building Equipment, Handbook and Catalogue of Kits and Accessories, 1/42 and 00. This early catalogue only list the first two sets (in both scales) – 1 and 2, and A and B. [image info] 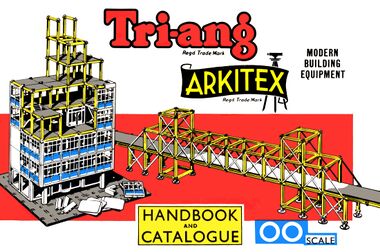 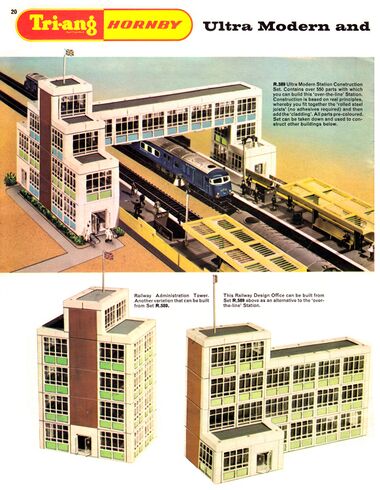 While Arkitex wasn't the only dedicated model building construction set (see Bayko), it differed from most in its emphasis on letting users create modern 1960s-style buildings in a manner as close as possible to the real thing. The user started with a base and built a rectilinear framework of "H"-cross-section girderwork, then added panels representing the prefabricated concrete panels that would be used in real steel-framed buildings.

The result was a very authentic model building, but the literal approach used by Arkitex meant that the system was very much dedicated to only producing models of contemporary commercial newbuilds, typically office blocks, blocks of flats, and ... for people with large collections of parts ... factory buildings and skyscrapers.

With its flat roofs and standardised panels, Arkitex was very, very good and replicating the rash of lookalike 1960s commercial developments that sprang up in Britain's major cities during the period, but it was (authentically!) stylistically limited, and was totally unsuitable for building, say, a model of a conventional domestic house.

In common with other building construction sets, Arkitex was caught in a dilemma of how to deal with the issue of scale. The dominance of gauge 0 railways in the 1930s had set a convenient scale which was then used for Dinky Toys and Spot-On models, and for most building construction systems including Bayko. However, while a 1:43-ish scale was convenient to work with for model buildings, the model railway gauge that had created it had almost disappeared in the 1950s, having been almost completely supplanted by the half-size 00-gauge model railway systems from Trix, Hornby Dublo and Tri-ang Railways. This left manufacturers of model building systems with an awkward choice of whether to support an obsolete model railway gauge that was still popular for toy cars (but whose owners might not want to assemble a building just to be able to park their model cars in front of it), or to support the popular half-size systems, which meant that they could sell their sets as ways of making trackside buildings for model railways, at the expense of making the parts smaller and much more fiddly.

In this regard, Architex had an advantage in that (unlike Bayko), Arkitex was based around the idea of large simple panels, and lent itself more easily to working at the smaller sale. Lines Brothers were able to offer the sets for both scales, with the physically larger 1:42 -scale sets assigned the numbers 1-5, and the smaller sets assigned the corresponding letters A-E. This allowed the company to market the larger-scale sets at owners of 1:42 Spot-On cars and accessories, and the smaller-scale sets at owners of its Tri-ang Railways model railways.

In keeping with Lines Brothers' somewhat "enthusiastic" approach to branding, Arkitex was branded with both the Tri-ang and Spot-On brandnames, making Arkitex arguably a sub-sub-brand.

The Arkitex logo's design was a reference to the Spot-On logo, with the Spot-On calipers replaced by a surveyor's theodolite, which had a similar shape and the same associations with accurate measurement.

Tri-ang Arkitex modern bulding equipment is a true to scale modern building construction which will appeal to all ages. Simple self locking parts, moulded in high impact Polystyrene – the girder framework is erected on a base and floors are positioned on each storey. Window panels, door panels, plain panels and vertical corners are then dropped into place, followed by the roof edging.

Each kit is complete in itself, and the basic kit enables the builder to complete simple modern buildings. Step by step instructions are given in the manual and details of expansion to each kit from the wide range of spares and accessories is illustrated and explained – allowing for the construction of unlimited variety of buildings from single storey office blocks to towering Skyscrapers.

Would be architects will find these construction kits a perfect outlet for their own ideas – use of the accessories makes possible the erection of more elaborate buildings with overhanging projections and pagoda type roofs etc. Beautiful buildings, practical buildings – buildings of unique and outstanding design – all can be built with the Arkitex Modern Building Equipment.

Tri-ang Arkitex is available in two scales – 1/42nd scale will tie-up with the Spot-On Roadway system and model cars – and "00" Gauge scale which ties up with Tri-ang Railways layouts.

The Arkitex range only lasted around five years, and was axed in ~1965, after the Lines Brothers acquisition of Meccano Ltd. The takeover of the Liverpool-based toy giant meant that Lines Brothers needed to rationalise their product range, which mean sacrificing the Spot-On range of diecast model cars in favour of the more popular Dinky Toys range which they now also owned. If the main bearer of the Spot-On name was now being discontinued, along with the idea of strict-scale 1:42 models, then the Arkitex range looked like a support product to a range that would no longer exist. Arkitex was also made at the same Belfast factory as the Spot-On diecast cars, so if the factory was being shut down, then Arkitex production would either have to be axed or moved to a different location, probably outside Northern Ireland, which would mean restaffing.

The Meccano Ltd takeover also meant that Lines Brothers now had multiple plastic building construction ranges. Meccano had already acquired Bayko, but developed Cliki, a plastic Lego "clone". While Bayko was to be sacrificed in favour of Cliki, Lines Brothers then inherited Cliki and found themselves with both Cliki and Arkitex.

With Lego becoming popular and the somewhat derivative "Cliki" plastic clip-together building blocks system also allowing users to make a wider range of building types (admittedly with less accuracy) the convergence of factors counting against Arkitex was probably overwhelming, and when the Belfast production lines closed, Arkitex shut down with it. A single Arkitex-derived product survived into the 1966 Tri-ang Hornby catalogue, the R.589 Ultra-Modern Station Construction Set ... but this was no longer advertised with either Spot-On or Arkitex branding, with the "R." in the product number signifying Rovex.

We have four (closed) boxed sets on display in the museum, the contents of which have been used to build three buildings and a section of bridgework, which stand in front of the boxes. The box artwork is almost identical between the sets, so the boxes are displayed with a lot of overlap in order to to save space.