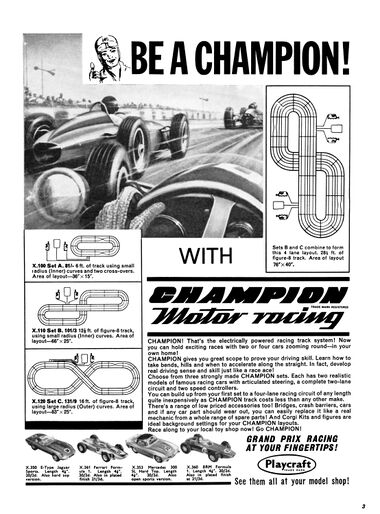 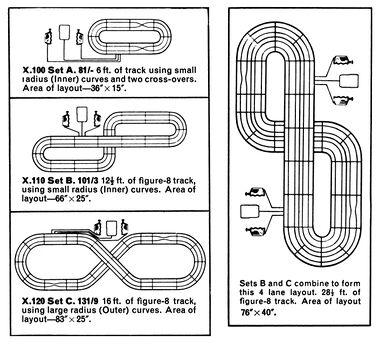 The Champion Motor Racing slotcar sets from Playcraft (manufactured by Jouef) appeared in 1964, as a replacement for their smaller 00-scale slotcar system that had been sold to Aurora after disappointing UK sales. Jouef also manufactured model railway sets for Playcraft, with a similar technological mixture of plastic bodyshells and electric motors.

Playcraft's "Champion" slot-car packaging artwork was black, white, and red, which gave it some thematic similarities with the packaging for their Playcraft Railways range.

The first advert we know of for Champion is in Meccano Magazine in September 1964, which describes it as "Fab!" and "New!". The last MM advert seems to be in the February 1967 issue. The adverts don't seem to have changed much (or at all!) suggesting that the range (at least, in the UK) may have been pretty static.

The Champion sets are generally described as being around ~1:40 scale, which would make then appreciably smaller-scale than Scalextric's 1:32, and put them reasonably close to the nominal 1:43 "gauge 0" scaling used by Dinky Toys and Corgi Toys (and to the exact, fixed, 1:42 used by Spot-On). "Champion" advertising suggested to buyer that Mettoy-Playcraft's own Corgi Toys might be suitable as background props.

SURPRISE of the Toy Fair for model car fanciers was undoubtedly the re-entry ... into the model car racing field with a system entitled, for the British Market, "Champion". This is manufactured by the French firm Jouef in France and provides an attractive variety of cars and equipment.

Scale for the two Grand Prix cars B.R.M. and Ferrari is approximately 1/36th (smaller than Scalextric, bigger than SRM) but for the other cars, two open sports, Jaguar and Mercedes, and similar hardtop versions of these cars, it would seem to be nearer to 1:42nd scale.

... Steering is employed, with individual return springs imparting a self-centring action. Neat braid current collectors are fitted, held at both ends ... Deliveries in England are promised around mid-Summer ...

THE Playcraft motor racing outfit which we first saw at the Brighton Toy Fair last year is now on the British market ... The track is of a black plastic material with a rough grainy surface. The metal pickup pieces appear to be model railway rail imbedded in the surface so that they lie flush. ... The elegant little motor lies in place with what is described as a solderless assembly in that the connections are spring-loaded against each other so that any components can swiftly be changed should anyone so desire.

... Other cars in the range which we did not have for test include Ferrari 250 G.T.O., Mercedes 300 S.L., Jaguar E-type, open and with hard top also for Mercedes. Coming later is a Lotus which looks rather like a 25 or 33 from the picture. Gold and silver plated Ferrari and B.R.M. models will be available at just over 1/- extra.

... We give the manufacturers and the importers full marks ... for the very nice presentation both in the box and in the quality of the detailed workmanship throughout the cars. ...

CHAMPION! That's the electrically powered racing track system! Now you can hold exciting races with two or four cars zooming round – in your own home!

CHAMPION gives you great scope to prove your driving skill. Learn how to take bends, hills and when to accelerate along the straight. In fact, develop real driving sense and skill just like a race ace!

You can build up from your first set to a four-lane racing circuit of any length quite inexpensively as CHAMPION track costs less than any other make. There's a range of low cost accessories too! Bridges, crash barriers, cars and if any car part should wear out, you can easily replace it like a real mechanic from a whole range of spare parts! And Corgi Kits and figures are ideal background settings for your CHAMPION layouts.

GRAND PRIX RACING AT YOUR FINGERTIPS!