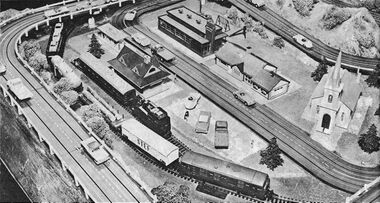 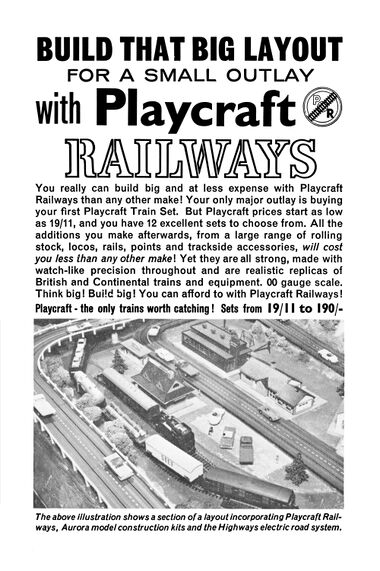 1962: The same photograph in an advert in Model Railways: "The above illustration shows a section of a layout incorporating Playcraft Railways, Aurora model construction kits and the Highways electric road system." [image info]

Playcraft Highways is nowadays chiefly remembered as being the first iteration of the successful Aurora Model Motoring system.

UK advertising tends to declare that the Highways system is scaled to work with 00 scale model railways (which equates to a scale of 1:76)

Contemporary reviews suggest that the cars may have been "smallish 00", and was probably therefore either H0 (1:87), or somewhere in between H0 and 00.

Although Playcraft Railways was made for Playcraft by Jouef in France, the box artwork for Highways says “Made in Great Britain”. Our example has Made in Great Britain (or abbreviated versions) also on the underside of the cars, and the metal controllers, but oddly, not on the plastic track.

While the Playcraft Highways system says "World Patents applied for", we haven't yet been able to find a successful patent for it.

If the Highways application failed (perhaps because someone else had put in a prior application for a vibrator-ratchet model slot-car), then this might explain why Playcraft stopped making the range, and how Aurora were able to acquire it, and why they promptly changed the motor to a new (and successfully patented) design.

Wrenn's Formula 152 slotcar system also used a ratchet-drive system, and was successfully patented, with the Wrenn patent being applied for in January 1959, so was the "Electric Highways" patent perhaps beaten by the timing of the Wrenn patent?

The "Highways" Electric Road System is an exciting new hobby for boys of all ages. Designed for two or four lane traffic, every "Highways" set, which contains two vehicles and two speed controllers, is double play value. Since "HIGHWAYS" has been designed in "00" Gauge scale, the possibilities of incorporating road layouts with any of the standard "00" Model Railway systems are endless.

HIGHWAYS, the exciting new Motoring Hobby, consists of roads, electrically driven cars and lorries, speed controllers and accessories. ll the vehicles are manufactured to the same scale as H0/00 Gauge Model Railways. HIGHWAYS roadway is in sections of two lanes, each lane being separately controlled by ts own individual speed controller.

Every HIGHWAYS Model vehicle contains its own electric motor and as many as three vehicles may be controlled together through one speed controller.

By employing sufficient road sections a great many HIGHWAYS layouts can be made either for two or four-lane traffic. Used in conjunction with any '00' Gauge Model Railway layout, HIGHWAYS can be laid beside railway track or cross over it by use of the bridge supports, or the railway can, of course, be arranged to pass over the road.

Two-or four-lane circuits can be developed for racing and the system can be built around cities, towns, and industrial areas providing main highway and secondary road communications.

By adding the many exciting accessories now being developed, HIGHWAYS Model Motoring will give you the opportunity of operating a real traffic system in miniature.

The Highways track sections had a central slot for each lane, flanked by a pair of nickel-silver rails embedded in the track, and comparatively widely spaced, which connected to springleaf contacts at each end of the section. Sections were fitted together by inserting a strengthening rod into holes at each side of the track, then push-fitting another section onto the rods. A "U-clip" staple was then pushed into a pair of holes at the joint in the centre of the track to lock the two pieces together. For extra stability, the U-clip holes were accompanied by a screwhole on each side, for users who preferred to screw their track down for extra rigidity.

Highway cars had a detachable pickup plate that screwed to the base of the chassis, and included a pair of sprung contacts. Officially, the baseplate was removable so that the contacts could be replaced when they wore out. Unofficially, putting the non-standard contacts onto a removable baseplate would have made it easier for Playcraft to change to a different format and upgrade the cars, or to allow users to modify their cars to run on different manufacturers' track, by swopping out the plate.

The system was supposed to be able to run off any suitable-amperage transformer with an output rated between 12 and 20 Volts.

Controllers were smallish rectangular "tabletop" boxes with a car driving wheel as a speed control, fitted with a pointer that pointed at a concave indicator scale set into the higher rear of the controller box, The higher section had a resettable circuit-breaker button that popped out if the track contacts were shorted out, and to the upper right of the wheel was a small hole where the owner could insert a starter key to turn the controller on.

"Starting the car" with an ignition key probably added a further level of ritual to the car-driving experience, ad may have allowed owners to hide the keys to stop other family members playing with the set while they were out of the house, but must have led to a certain amount of frustration if the keys were lost!

from the guarantee card:

"Highways" was replaced in Playcraft's range (after a "gap") by the Champion Motor Racing slotcar system, manufactured by Jouef for Playcraft, which had a much larger scale, and was closer to the gauge 0-ish scale used by Mettoy Playcraft's Corgi Toys range of diecast cars.