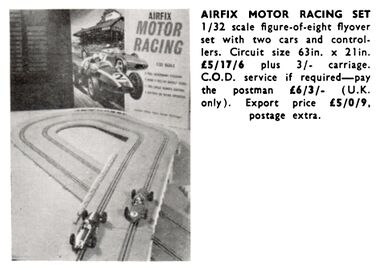 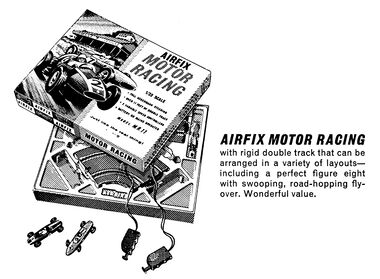 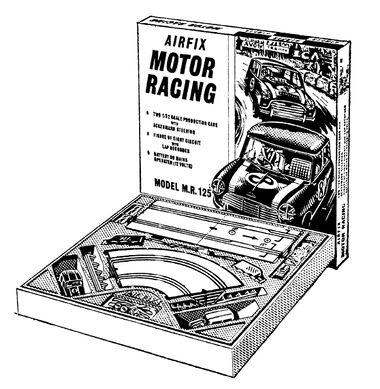 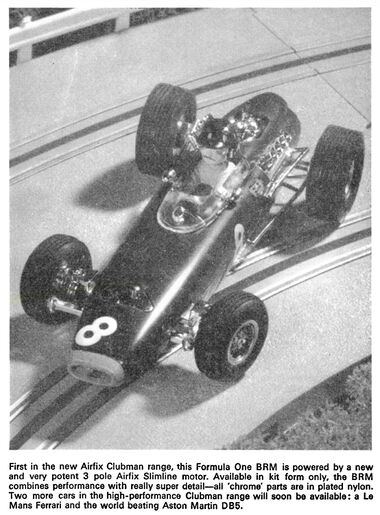 Airfix Motor Racing / Airfix Motor Ace / Airfix MRRC was a 1:32 scale slot-car racing system introduced by Airfix in 1962, and sold by the company until the Airfix company's failure in 1981 (at which point MRRC Ltd. became independent once more).

The origins of the product line go back to MRRC's creation in 1951, when the company was involved in "rail" car racing.

Model Road Racing Cars Ltd. was incorporated on 10 August 1951. The company apparently started out selling equipment for "rail-based" car racing, then migrated to slotcar racing (and conversion kits for "rail" cars), and used the metal bodies of clockwork cars made by Scalex to create some of the earliest slot-cars (Scalex apparently then realised that this was a good idea and produced the famous Scalextric system).

MRRC Ltd became part of the Airfix group in 1962.

THIS month marks a milestone in Airfix history. With the introduction of their new electric Motor Racing sets (described elsewhere in this issue) they have become actively engaged in a fascinating and rapidly growing indoor sport for mechanically minded modellers. The name Airfix has always been synonymous with high quality and excellent value for money, so it is really no surprise to find that this new Airfix line is being marketed at an extremely competitive price.

But there is added significance to this Airfix newcomer. Keen observers will note that its 1/32 scale corresponds with that of the Airfix modern cars series of kits. Also that the robust and compact electric motor (made by Airfix themselves) has an obvious application in motorising the plastic car kits. Other subjects for motorisation which come immediately to mind are the diesel railbus and the Drewry shunter. In view of this potential demand, Airfix are already planning to make the new motor available as a separate item.

The new racing set marks only the beginning of the activities of Airfix in this field. Already in preparation are a comprehensive series of accessories which, ultimately, will allow model racing enthusiasts to reproduce accurately all the major features of the full-size racing circuits, enabling the exciting atmosphere of this sport to be recreated in the home.

Ten months of intensive development work by the Airfix design team to perfect their new "baby" were concluded just in time for it to make its debut at the Brighton Toy Fair in February. There, it received an enthusiastic welcome from both home and overseas trade buyers, and there seems little doubt that it will attract equal acclaim from the buying public.

For easy access to the electric motor, front suspension and rear axle each body shell splits horizontally into two pieces by unfastening one screw at each end.

The track is injection moulded from high impact polystyrene and is hygienic and safe with no sharp edges. Each section has a locating lug at each end which is received by an appropriate slot: this obviates lateral movement of the track. Longitudinal stability is ensured by strong polystyrene press-in clips which link each track section to its neighbour. Strips of T-section brass rod are let into track sections to give efficient power transfer to copper braid pick-up brushes on each car. At the end of each section of brass strip is a fold-down tab in phosphor bronze to ensure good electrical contact between track sections.

Body shells of the cars are made of high impact polystyrene. First models in production are of the G.P. Cooper and Ferrari. Notable features are front suspension, Ackerman steering units and track locating lugs in moulded nylon, with rubber tyred wheels. The compact 12 volt electric motor is robust with easily replaceable brushes. Drive shafts have nylon bushes and twin pick-up brushes are of copper braid.

A 12 volt dry battery or a mains transformer is needed to supply electrical power to the Airfix Motor Racing track. Into one section of the track is built a three-pin socket to take the low voltage power from the battery or transformer. The 12 volt supply passes from the socket to energise each of the brass pick-up rails.

Airfix Motor Racing sets are packed in a strong, cardboard box with separate compartments for cars, track sections, controllers and accessories. The box has a colourful and dynamic motor racing picture on the lid.

Airfix Motor Racing was launched in February 1962, without an obvious logo for the name, but with a modified version of the Airfix "banner" logo that had the two rear "wings" of the banner in black and white chequers, to represent motor-racing's "chequered flag".

The launch didn't happen in time for the product to appear in the first (1962) proper Airfix catalogue, but is proudly shown in colour on the back cover of the 1963 catalogue.

Thrills, spills, excitement ... all the tense drama of Grand Prix racing. Airfix brings you such realism. Press the throttle and you're racing away in a Mini-Cooper or a Ferrari. Lap after Lap it's high speed fun. Real driving skills (and daring) needed to win! Runs off mains or battery. Every Airfix set has a rigid, double-lane track, two speed-controllers and banking supports. One includes a PERFECT FIGURE 8 with a swooping, road-hopping flyover. All Airfix authentic 1/32nd scale models have Ackermann steering for natural cornering. Join the Airfix racing drivers!

For the 1968-1973 catalogues, the system was rebranded MotorAce, still with the chequered-flag version of the Airfix logo, but now with a proper logo for the new name with MotorAce run together into a single word leaning rightward, and the peaks of the "M", "t" and "A" leaving streaks to the left to indicate speed.

The MotorAce branding no longer appeared on the cover of the 1973 catalogue, with the product line now being referred to as Airfix MRRC, with credits being given to MRRC Ltd., or Model Road Racing Cars Ltd.. The MotorAce name was still being used on some (legacy?) materials, but the brand emphasis was now on MRRC, and the advertising we've seen in Airfix Magazine for this period just uses AIRFIX MRRC.

MRRC Ltd. survived the collapse of the Airfix group, and are still producing slotcar systems ... their homepage can be found at mrrc.com.