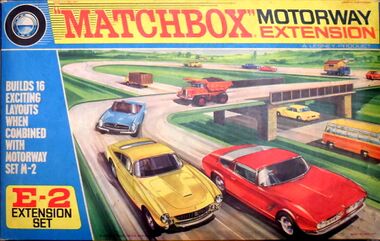 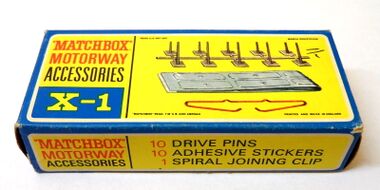 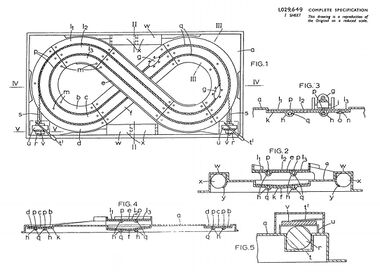 Matchbox Motorway was an unusual slot-car system that allowed unpowered toy cars (such as those made, coincidentally, by Matchbox) to drive around a road system.

The Matchbox Motorway system looked superficially like a conventional slot car track system, with curves and straights (with a pair of slots) that could be connected together to produce loops or figure-of-eight track layouts.

Where MM differed from most other systems was that the grooves carried no electrical power – instead, each groove opened into a box-channel, and once the track was assembled, the user would have to thread a long helical metal spring through the channel and hook it up to itself to make a closed loop of spring. The two springs would then be made to circulate around the track by an electric motor.

One could then use sticky-tape to fit a long plastic prong to the underside of a standard Matchbox car (or other toy car), place the car over a slot so that the prong engaged with the spring, and the car would be pulled around the track.

Advantages of the spring-drive system were that you could use almost any small toy car, and (friction permitting) you could use multiple cars on each spring to recreate the effect of busy circulating two-lane traffic. With enough of the cheap plastic prongs (also available separately in accessory packs) your toy car collection could create slow-moving traffic jams, where the cars were guaranteed to maintain roughly the same spacing.

Disadvantages included the fact that the system wasn't really optimised for racing (which was what most people bought slot-car systems for), and that the track couldn't cross itself – the figure-of-eight layout was achieved by using a bridge.

Welcome to your new world of action with your exciting "MATCHBOX" Motorway. A dual roadway designed exclusively for all your "MATCHBOX" models – you can drive, race and control them all!!

Apart from batteries your set is complete, including dual speed controls and two "MATCHBOX" cars. The track is made of high quality durable plastic parts, which you will find easy to put together and pack away.

Any of your "MATCHBOX" models can be used and more than two vehicles can be driven at any time to make your Motorway realistic. You can even reverse directions to have two lines of opposing traffic. Or, you can race your own "MATCHBOX" Grand Prix.

There is no end to the excitement and thrills with your "MATCHBOX" Motorway.

Put action into your "MATCHBOX" Collection

The new "MATCHBOX" Motorway is a completely new system of track, designed specially for all "MATCHBOX" models. Any "MATCHBOX" model can be motorised by simply fixing a special self adhesive guide pin to the bottom of the car. The pin is positioned in the track slot where it locates in a continuous, flexible spring which, with the cars attached, is driven round the Motorway by a fixed motor. Speed can be controlled by pressure applied to the hand speed controller.

The track is made from high quality durable plastic parts which fit easily together allowing children to have realistic Grand Prix races or drive any number of cars and lorries in opposite directions, simulating every day traffic.

The set is complete with two hand speed controllers, motors and full instructions plus two "MATCHBOX" models. All you require are the batteries or the specially designed power pack – details of which you can obtain from your toy dealer.

The design used by Matchbox Motorway, including the distinctive combination of 180-degree and 90-degree track segments, was submitted to the Patent Office in February 1965 by Hans Biller, of 9, Praterstrasse, Nuremburg, Germany, with the patent granted in 1966 (UK patent number GB1029649).

Biller had been an engineer at Bing until it company went bust in 1932, and then went on to found his own toy company.