The French company Charles Rossignol (C.R.) produced lithographed tinplate toys before World War One, and (like a number of other toy manufacturers like Meccano Ltd in the UK) took the opportunity to move into producing gauge 0 model trains and train sets after the dominance of the big German toy companies in this area was broken by the War, and by post-war German economics and widespread anti-German sentiment.

Just as the "Golden Period" of the German manufacturers is considered to be the time when their pieces still had a slightly artistic and surreal "toylike" element (before they got "too good" at producing literal scale models of trains), the Rossignol model railway pieces that are of the most interest to collectors are the very early items, which had a strong distinctive character and identity that became a little more subdued in later pieces.

At a very superficial glance some Rossignol pieces can look a little like early Bing tinplate (due to the common use of lithographed tinplate technology), but on a second look, the choice of colour schemes and the use of emphasised pinched contours give many Rossignol pieces a very different and very "Parisian" style, slightly reminiscent of period French cartoon work, or the sketches of UK cartoonist Ronald Searle (who was British but very influenced by French art).

Another, rather more obvious "giveaway" is that CR pieces were often models of French vehicles.

Rossignol lithographed pieces tend to be marked "C.R.", either as a logo or as simple text. 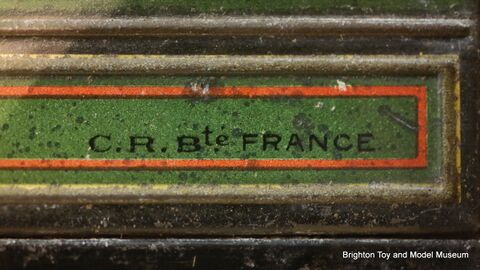