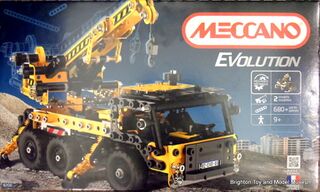 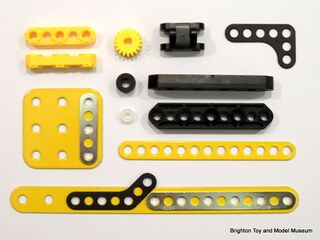 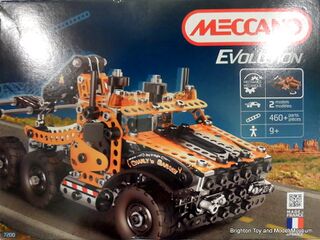 The Meccano Evolution series is the latest iteration of the basic Meccano concept, launched to the toy industry in January 2013. The sets were released to the public in Autumn 2013.

"Evolution" represent a a partial return to the "engineering-based" philosophy of the early Meccano sets, rejecting complex cosmetic parts in favour of larger numbers of simpler general-purpose components. As a response to criticisms that some modern sets were too "gimmicky", "Evolution" can be compared to the Lego company's release of the "Lego Creator" sets as a reaction to similar grumbles that some Lego models were "cheating" by using too many custom parts.

Since the new smaller parts use less metal, they allow Meccano sets at a given price level to have a higher parts count and to be capable of building more complex and sophisticated models.

As of December 2013, the range consists of five models:

"Evolution" isn't the first time that the Meccano range has received parts with half-spacing holes - there was also the 1930s Meccano X Series range.

However, the "X" initiative was probably less an attempt to modernise the Meccano range of parts, and more an attempt to undermine sales of the Trix metal construction system (which it appeared to borrow heavily from). Although the "X Series" parts could be used with Meccano, they didn't seem to be designed with the rest of the range in mind, and "X" disappeared after a few years.