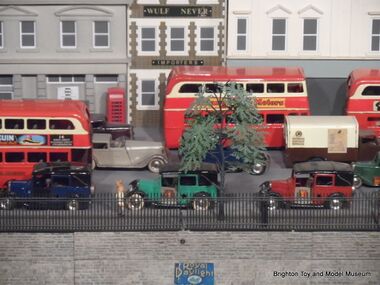 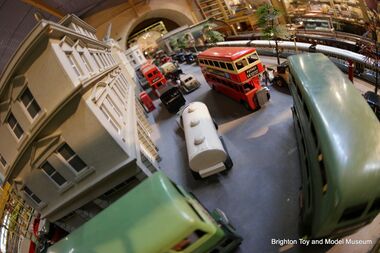 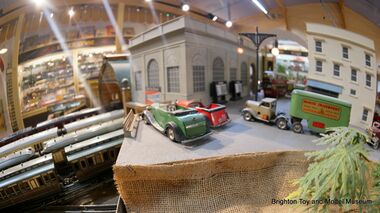 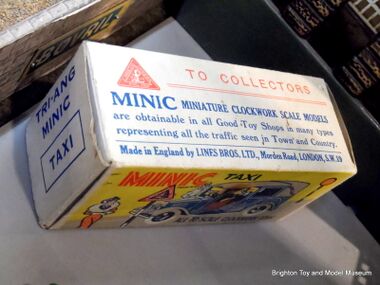 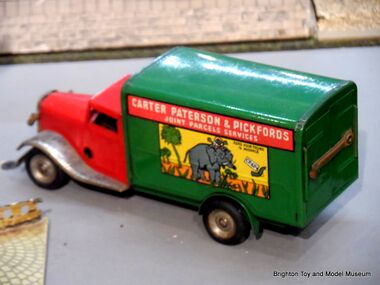 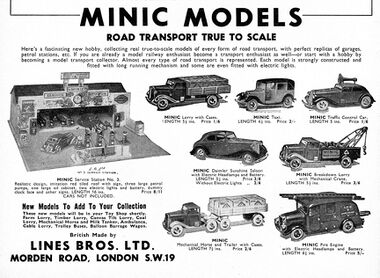 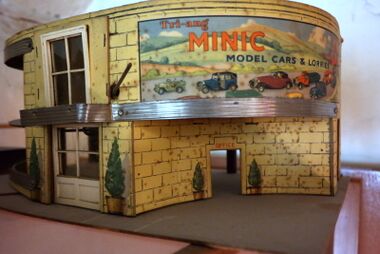 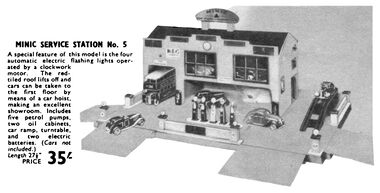 Triang's range of MINIC-branded metal model road vehicles appeared in the June 1935 issue of Meccano Magazine, and continued to sell through the 1940s and 1950s.

Anomalously, the Minic range of vehicles doesn't seem to have been given its own name or sub-brand (unlike Minic Ships), they were simply sold as "Triang Minic", without a qualifier (although "Minic Transport" did keep appearing as a fictitious haulage company mentioned on some of the models' signage). It's been suggested that MINIC was meant to stand for "Mini Clockwork", and while there are some notable exceptions to the rule (e.g. Minic Ships), this does seem to have been the guiding principle for most of the Minic range, and certainly for the vehicles - while some of the larger plastic cars were originally produced with rubber-band drive under the Tri-ang Penguin brandname, they became part of the Minic range once they were reengineered to take clockwork (or, stretchimg a point "Push and Go" friction drive) motors.

In keeping with the museum's focus on 1930s technology, the Minic road vehicles that we have in the museum are all from the classic "1930s" range, and from its post-war continuation – we don't currently keep the later plastic-bodied versions.

… the MINIC cars are a line you are sure to like. They are the first to be all to scale, so that the bus is the right amount larger than the coupé, etc.

The focus on correct relative scaling (so that one could assemble convincing street scenes) later became the main distinguishing feature of Tri-ang's Spot-On diecast range.

Initially, the Minic road vehicles were produced using painted tinplate with a "tab and slot" assembly method, and although it's common nowadays to look down on tinplate cars and to expect them to be more "toyish" than models produced with more modern methods, tinplate allowed more precise scalings for very thin parts such as windowframes and wheelarch edges - areas where a designer creating for plastic mouldings or cast metal would have to make the parts artificially "fat" so that they could be produced reliably and wouldn't be prone to breakage.

The result with the Minic range was a set of models that were startlingly realistic when viewed up-close, and the pack artwork for the Minic vehicle range stressed the degree of accuracy - "All to Scale". The models were even more desirable (and impressive) when one realised that each one managed to incorporate a clockwork motor.

The Minic series clockwork motors were specially designed to allow modification for different gearings, so that, for instance, a racing car ran faster than an conventional car. The steamroller's mechanism was geared to run slowly, and it would actually halt and then reverse, just like a real roller driving back and forth over a section of road surface to flatten it. The "Learner Car" was distinguished not just by its "L -plate", but by having a deliberately misaligned back axle and almost gripless tinplate back types, so that the car skidded and swerved wildly when run. The Minic breakdown Lorry actually had two clockwork motors – one for driving the wheels and another for powering the crane.

While Meccano Ltd.'s early Dinky Toys were were designed to be cast from a minimum number of parts and therefore tended not to change too much (since new moulds required an expensive retooling process), the early Minic range (constructed from stamped, folded and painted tinplate) was more prone to gradual evolutionary changes, as individual stamping tools became worn out and replaced, producing a range of very minor differences in physical detailing. However, it's common to crudely classify early Minics as "pre-war" or "post-war", with the definition of "post-war" sometimes stretched to include variations that might have appeared in the very late 1930s (~1939-ish onwards).

In brief, the pre-war sequence was:

Many of the commercial vehicles were updated from having "long bonnets" to a newer design of cab with a flat front (introduced on real lorries for better visibility). The long-nosed ambulance announced before the WW2 shutdown didn't appear until after the war, with a flat-fronted cab. A few parts were replaced with plastic, such as the roller on the steamroller model.

Some new "No.1" Minics appeared with moulded plastic bodies, and some of the plastic Frog Penguin range migrated into the Minic lineup.

Also appearing in the 1950 and '51 catalogues was a new larger-scale range of vehicles, mostly plastic-bodied, but with a few (like the Jeep) made from steel plate.

The "tiny" 00-scale Minics started being advertised in 1954, with harder plastic bodies

Because the Minic vehicles were originally intended to complement other "gauge 0" pieces, we've displayed them in their natural habitat rather than keeping them in a separate cabinet - all the vehicles scattered around the Museum's large central gauge 0 layout (over sixty in total) are Triang Minics, as are the cars decorating the "Building Sets 2" cabinet.

The following 61 pages are in this category, out of 61 total.