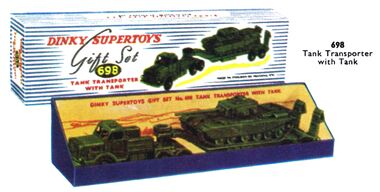 The Centurion tank design had a long lifespan, and the corresponding Dinky 651 Centurion model was one of the longest-running Dinky toys, produced from ~1954 to 1970.

The Centurion design project started in 1943 to combine everything that had been learnt about tank and anti-tank warfare into a single design for a "universal tank" that would be able to take on the German "Tiger" tanks. However, the first Centurions didn't appear until 1945, too late to participate in WW2 combat.

Late in the design process, the main gun was upgraded and the turret enlarged to carry it, with the final design no longer being quite as general-purpose as originally envisaged, but the design was still considered a classic and was highly successful.

The British Army eventually replaced the Centurion with the Chieftan tank in the 1960s.