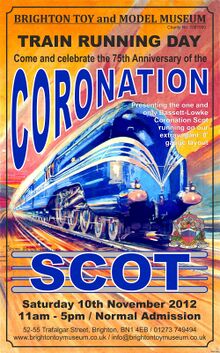 Our one, however, has the full nine, and would presumably have been built as a special order.

On 10th November 2012 we ran the big blue streamliner on the central 1930s layout, accompanied by our matching red Coronation-Class Bassett-Lowke Duchess of Hamilton loco. Some modern Ace Trains gauge 0 models of the Coronation locos were also guesting for the day (in blue, red and wartime black), and a couple of those also found their way onto the track.

Meanwhile, over on the 00-gauge layout, we were running a smaller-scale Coronation Scot, the latest high-detail model kindly supplied by Hornby, with a rake of coaches, which could be compared (by those with keen eyesight) to the older 00-gauge versions in the dedicated Coronation Scot cabinet.

The Museum's Train Running Days are fun events for anyone who likes trains, but this particular one, if you are a Bassett-Lowke or Coronation-Class enthusiast, was utterly unmissable. For anyone whose interest was more casual, it was a great time to come along.