The Museum is increasingly finding itself playing host to TV crews. Here's some of the Museum's recent media coverage. 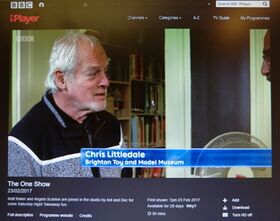 The Argus: On track to celebrate Hornby's 150th
Tuesday 7th May, page 7 (scan)

BBC SouthEast - Puppet Show (BBC1)
Caroline Feraday presents and interviews Gerry Connolly from Worthing Museum on the 350th anniversary of Punch and Judy ("The Big Grin"). The interview takes place within the Toy Museum, and includes closeups of some of the Museum's Punch and Judy exhibits (uncredited).
Aired Monday 28th May 2012, 6:30pm

Put Your Money Where Your Mouth Is, Series 6 (BBC)
Chris Littledale, Museum Director buys a wooden Noah's Ark for the Museum. The ark is now on display in Arch Two.
Episode aired during the week 16-20 April
http://www.bbc.co.uk/programmes/b01f8lvz/episodes/guide