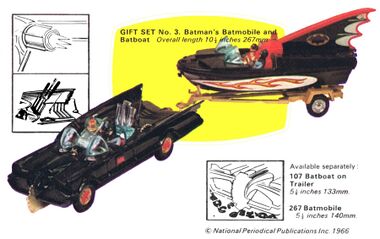 A diecast toy Batmobile (Corgi Toys 267), displayed in top of the original box. The model was introduced in the late 1960s after the showing of the 1966 Batman TV series with Adam West, and comes with a cardboard display with fold-out side wings.

Corgi's Batmobile model was one of the best-selling and most iconic diecast toys of the C20th (beaten by Corgi's model James Bond Aston Martin DB5), and getting the contract to make the toy was one of Corgi's many film and tv marketing successes. For schoolkids in the 1960s, having a Corgi James Bond DB5 or Batmobile was an immediate way of acquiring playground friends

Designed for the Batman tv series, the 1960s-era Batmobile was generally reckoned to have been based on a modified Lincoln Continental, a very long car commonly used as an executive limousine, with or without customisations. The car that President John F. Kennedy was riding when he was shot (codename S-100-X) was a modified 1961 Lincoln Continental 4-door convertible.

However, the tv Batmobile was actually a custom car based on another custom car based on a Lincoln, as the vehicle was actually converted from a one-off publicity concept car, the pearlescent-white Lincoln Futura. The heavily-finned twin-cockpit Futura was designed by Lincoln's Bill Schmidt and John Najjar Ferzely and bought by custom car bodywork designer George Barris. When the TV series producers needed a working Batmobile built in a ridiculously short amount of time, Barris ended up with the contract, and modified the Futura to look more like the production sketches, keeping ownership of the car and loaning it to the studio. With the success of the TV series and the car, Barris was commissioned to make replicas of the car, and since making the Batmobile had resulted in the loss of the world's only Lincoln Futura (which Barris had presumably rather liked), he later converted one of the Batmobile replicas into a Futura replica.