The Museum's 00-gauge model railway layout runs along the Museum's back wall.

The layout extends through Arches Three and Four, and usually has trains running during Museum opening hours. 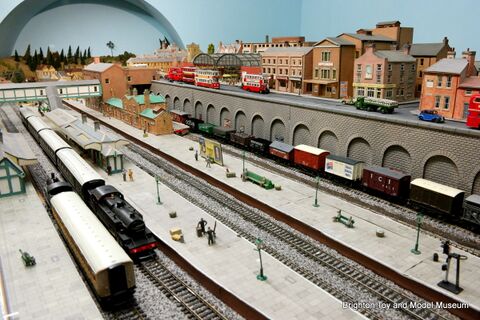 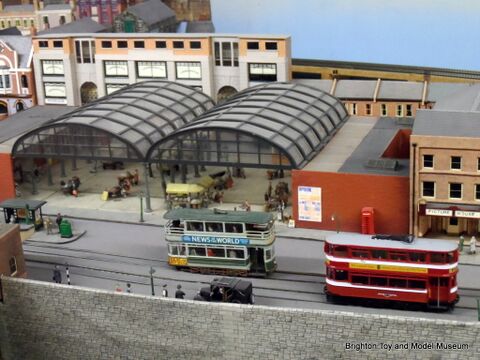 Part of the Tramway layout

The part of the layout running through Arch Four concentrates on urban scenery and also contains an electric town tram layout, and an extremely detailed model of Hastings' East Hill Cliff funicular railway.

"When I was about eight years my father bought me a Triang "00" gauge American style train set.

I was very disappointed with the brightly-coloured plastic train which compared poorly with the Hornby "0" gauge tinplate train at my Grandfather's house. I never did get an 0-gauge train so I had to be contented with 00. I did, however, change to British trains.

I have always found playing with trains a little boring. What interests me most is the design and construction of the townscape and its relationship to the trains. In 1978 I began to rekindle my interest in modelbuilding and the early development of Newtown commenced.

Some of the buildings are kits, but most are built from scratch and resemble buildings that I remember from childhood. Because I am a Northerner, Newtown has a distinctive Yorkshire feel about it. the original layout was 6'×4' and expanded to 5' 9½". I met Chris Littledale and company and fell in love, again, with 0-gauge! I lent the layout to the Toy Museum while I redecorated at home but, while it was gone, the urge to develop the 0-gauge collection took over and so the layout remains a feature f the 00-gage layout. An army of volunteers worked very hard to redevelop the top half of the 00 layout. a canopy was installed to protect the cardboard model from any debris floating about. But alas! All was in vain when the goods yard began to flood from the water penetration. The station platform began to warp from the damp. It was decided to remove the townscape into safe storage until a remedy for the water ingress could be found by Railtrack.

This brings us up to date, Newtown is currently stored beneath Chris' wonderful 0-gauge layout awaiting reconstruction. "

UPDATE: The layout returned when the museum reopened in 2001