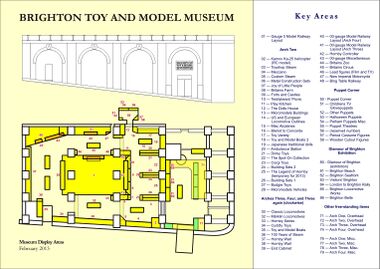 The main body of the museum building consists of a set of interlinked heavy brick Victorian cellars and stables, built some time around ~1841-1843, shortly after the opening of Brighton Station in 1841. The cellars provide support for the cab rank outside the Station, and for one end of the bridge linking the station to Queens Road.

The museum's main public area consists of a series of four Victorian arched spaces set under Brighton Station's forecourt, divided into the main museum foyer (Arch One), which is just inside the main entrance, and three further arches which make up the ticketed museum space.

Due to the slope of Trafalgar Street, the floor of the three "ticket-holders only" arches is set at a higher level, and is reached either via the steps opposite the museum till, or, for wheelchair users, via our separate wheelchair entrance in Arch Four, which doubles as an emergency exit for the top part of the museum.

At the back of Arch One, behind a set of "No Entry" gates modelled on level crossing gates, is our Restoration workshop, the entrance to our Resource room, and the stairs to our upper private level, which has our Sort Space and Construction workshop.

The four auxiliary brick-arch areas that lead off from the right hand side of Arch One were originally built in the 1840s as stables for horses, and are now used as (1) the museum's public toilets, (2) the staff kitchen/tearoom, (3) the main Office, and (4) the Resource room.

Above each of these is an additional arched bay that was originally used for storing hay that could be dropped down to the horses below via a square access hatch in the floor. These bays are now used for auxiliary storage.

A fifth arch (not shown) is undergoing long-term repair.