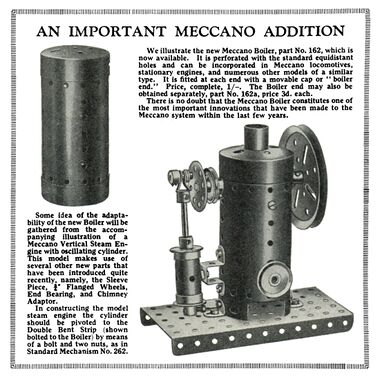 Stationary engines were the first configuration of the steam engine, before the appearance of steam locomotives made the word "steam engine" almost synonymous with railway engines.

The stationary steam engine was a popular choice of model for model engineers (if they could obtain the necessary hard-to-make cast parts), and W.J. Bassett-Lowke set up his model engineering supplies company partly to address this need, at about the same time that Stuart Turner started supplying parts and kits, and Model Engineer magazine launched its first issue.

The more extravagantly engineered models might be scale models of beam engines, but many had a simple upright or horizontal boiler on a base feeding steam to a single or double-piston and a flywheel, with no pretence being made that this looked much like a larger real-life stationary engine. The thing was ... it worked.

Simple pre-built engines were sold by Marklin, Bing and by Bassett-Lowke Ltd. (whose suppliers included Stuart Turner, and who also sold kits). In the late 1920s and 1930s, a healthy market sprang up supplying small steam engines for powering Meccano models, and Geoffrey Bowman Jenkins had the brilliant idea of supplying engines on steel bases with rows of holes pre-drilled to quarter-inch Meccano-compatible spacing.

Bowman sold some of his earlier engines under the Wormar name through adverts in model railway magazines and Meccano Magazine, and through Hobbies Weekly. Bowman sold his later engines as Bowman Models products and separated from Hobbies Ltd., who then made a deal with another Geoffrey, Geoffrey Malins, to supply them with a range to replace Bowman's. Malins' engines became branded as Mamod (="Malins Models").

The rash of companies supplying "steam engines for Meccano" in Meccano Magazine didn't go unnoticed by Meccano Ltd, and the company recanted on their earlier assurances that they weren't going to make a steam engine, with the upright Meccano Steam Engine appearing in 1929. The later 1970s Meccano Steam Engine was manufactured for them by Mamod, who then also produced their own version in non-Meccano colours.

With a few adaptations, a stationary steam engine design could be adapted to fit in a model boat and drive a propellor driveshaft. However, a marine engine could also be displayed as a stand-alone unit. Some of Bowman's engines were dual-use, they could be detached from their boat and used to drive stationary equipment via a drive band.

While watching a stationary steam engine running was very satisfying, the devices had limited play value – to counter this, companies produced ranges of add-ons, which were usually working models of industrial factory tools such as drills, presses, grinding wheels and table circular saws.

The term "Working Models" came to be a standard term for these accessories.