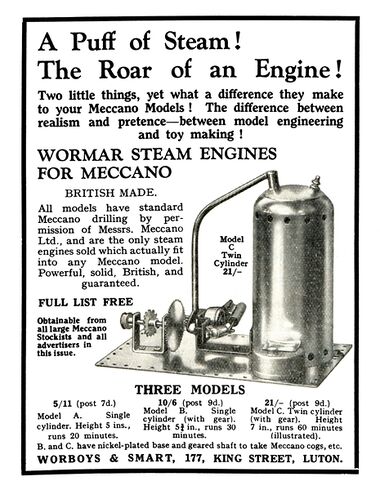 1927: "A Puff of Steam! The Roar of an Engine", "the only steam engines sold which actually fit into any Meccano model [image info] 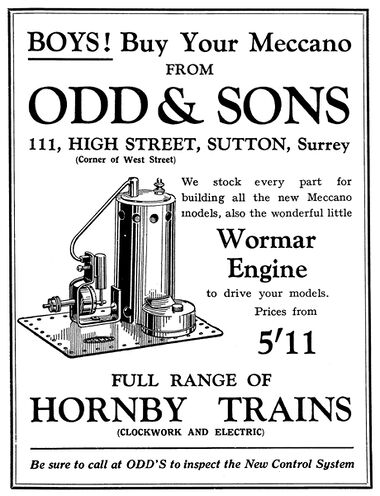 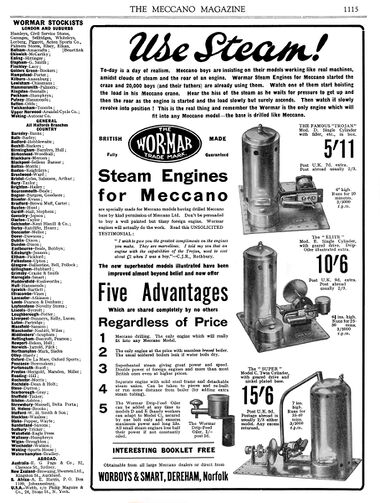 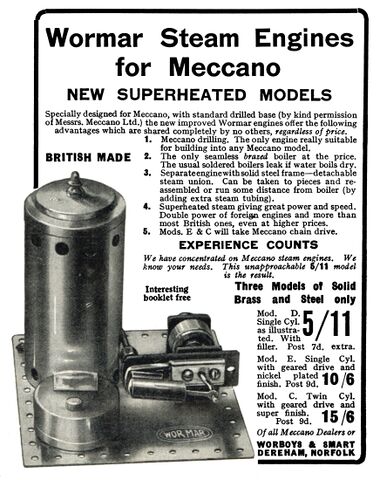 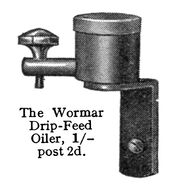 Wormar (Warboys & Smart) advertised a range of stationary steam engines in Meccano Magazine from late 1925 to 1927. A major selling-point for the range was the use of a metal base with holes at Meccano-compatible spacings to allow the engines to be built into Meccano models, a feature that Warboys & Smart claimed was unique.

We currently know of five Wormar stationary engines, A through E. Models "A" and "B" seemingly had no other name, "C" was usually referred to as the Super, "D" was better known as the Trojan, and "E" was the Elite.

It's generally reckoned that at least some of the Wormar range were created and produced by Geoffrey Bowman Jenkins, and the Meccano Magazine adverts up until January 1927 certainly carried the words "Jenkins Patent". The cessation of the Meccano advertising in ~1928 seems to coincide with Jenkins becoming more involved with Hobbies Ltd., also in Dereham.

Warboys & Smart of Luton were involved in Luton's then-flourishing "straw hat" industry (the jutting-front "Luton van" design was named after Luton and created to create extra space for lightweight goods, specifically for straw hat manufacturers). The company was run by Charles and Kate Smart, and son Bernard A. Smart (1891-1979) joined the company in 1911. The steam engine range seems to have been a joint venture between Geoffrey Bowman Jenkins and Bernard A. Smart prior to the creation of Bowman Models.

for driving all models, but specially adapted for building into Meccano Units, by kind permission of Messrs. Meccano Ltd.

Don't confuse this engine with the cheap German articles. It is British made throughout of solid brass and steel, and carries the guarantee of our 40 years' reputation. It is only many years' experience with model making and latest mass production methids that have made its production possible. For power and durability we have no hesitation in syaing that it is EQUAL TO MANY ENGINES AT £1 1 0

THE STEAM ERA FOR MECCANO

Just as Stephenson's Steam Engine brought about a new era in engineering, so has the Wormar Steam Engine for Meccano revolutionised the methods of Meccano workers throughout the whole world. We have received large numbers of unsolicited letters testifying as to the tremendous additional pleasure and instruction Meccano workers of all lands have derived from the use of this engine with their Meccano sets. Realism has always been the goal of model workers and the Wormar Engine not only enables you to drive your models exactly like the real machines you are imitating, but when you see the clouds of steam, and hear the roar of the high speed engine coming from your Meccano Steam Crane, etc., you feel you are really making engineering models and not just clockwork toys.

Being drilled with standard Meccano drilling (by kind permission of Messrs. Meccano Ltd.), the engine can be transferred from one Meccano model to another by removing 4 screws).

Is your outfit up to date?

"The Steam Era for Meccano"

Do you realise that if you are driving your models by clockwork or electricity, you are not only failing to make them realistic but your methods are out of date? A steam engine, if British made by model engine specialists, can do all that the old power units can do as regards power, safety and reliability and in addition you get – realism ! ! Your models are no longer toys but real engineering models – actual replicas in miniature of the large commercial machines. Nine-tenths of the working models in the Meccano Catalogue are in practice driven by steam. Imagine your Meccano crane hoisting the load amidst clouds of steam and the roar of a high speed engine! Doesn't it sound real and isn't it just that reality that your models have lacked?

Wormar Steam Engines are the ONLY STEAM ENGINES MADE to fit Meccano. Constructed only from solid British brass and steel and with our unique experience behind them, they are in quite a different class from the "tinny" but beautifully painted foreign engines which have brought model engines into disrepute. They are the outcome of 10 years' concentration and develop DOUBLE THE POWER of the average foreign engine and more than most British ones at double the price. Numerous unsolicited testimonials confirm these statements.

A puff of steam!

The roar of an engine!

Two little things, yet what a difference they make to your Meccano Models! The difference between realism and pretence – between model engineering and toy making!

B. and C. have nickel-plated base and geared shaft to take Meccano cogs, etc. 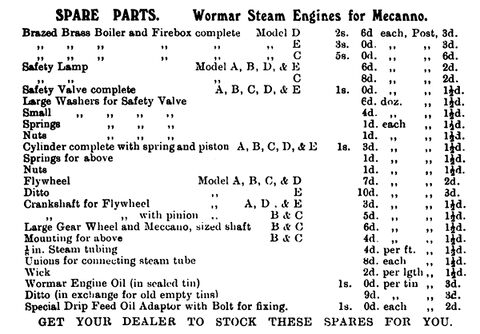