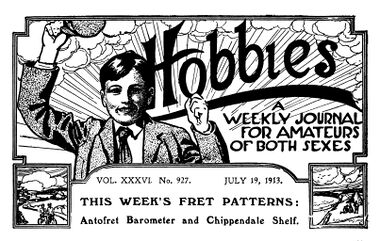 1913: Hobbies: "A Weekly Journal for Amateurs of Both Sexes" [image info] 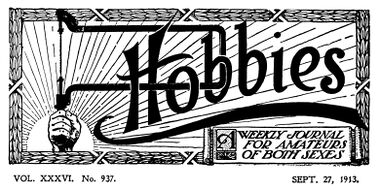 Hobbies Magazine, or Hobbies Weekly, was the regular publication of Hobbies Ltd. of Norfolk from 1895 onwards. Officially titled just "Hobbies" for much of its life (subtitled variously "A Weekly Journal for Amateurs of Both Sexes" and "The Fretworker's Weekly. For all Amateurs and Craftsmen"), the magazine was informally known as Hobbies Weekly to distinguish it from the company and the company's yearly catalogue/annuals. It became officially named Hobbies Weekly in 1933.

The magazine went through a number of name changes during its run, notably toward the middle to end of the craze for home constructed wireless sets that lasted from the late 1920s to the mid 1930s.

The magazine's circulation declined after WW2 in sympathy with the general downturn in the company's fortunes, and ceased publication in 1965, followed a year or two later by Hobbies Ltd. going into receivership.

The Hobbies weekly went a relaunch and overhaul in late 1930, also switching to a new publisher, Newnes, whose stable of other publications included Newnes' Home Mechanic.

Up until September 1930 the magazine had been somewhat dull-looking, with a dull orange background featuring a turquoise panel with black scrollwork featuring a comparatively small black titled line image of an often-uninspiring scrollwork object.

From the beginning of 1930 onwards, the cover was no longer specific to scrollwork, and featured larger, colourful, and more exciting images of a wide range of hobby activities. This was a vibrant period for the magazine, which carried cutting-edge articles from experts such as Bassett-Lowke's engineer Henry Greenly and their model aircraft expert Ernest Twining, as well as other anonymous "world experts". Topics included theoretical and practical articles on radio and television, the design of model railways, scenery, airships, specialist photographic techniques, different methods of powering model aircraft, building and flying real aircraft(!), and a number of competitions where readers could construct a model made from supplied card parts, and the best submitted entries could win a range of prizes including an actual motorcycle.

The new craze for radiograms meant that readers could build a new-fangled radio set, and show off their fretworking skills with a fancy cabinet housing, and for a brief period, Hobbies experimented with the names Hobbies and Practical Wireless', and Hobbies and Wireless Supplement.

With the relaunch the range of advertising also ballooned, and "external" advertising was no longer quite so dominated by quarter-pages extolling the wonders of vegetable glue.

This old-established and popular Journal (nearly forty years old) will, as from the next issue, be produced in a new form.

It will be an entirely New Hobbies – new and larger in size, with a new and strikingly attractive two-coloured cover each week, and it wil contain more pages – 32 larger pages packed with matter and illustrations of interest to everyone with a hobby. Its price will remain, as at present, 2d. every Wednesday.

The text and illustrations will be presented in a bright and interesting manner and lead writers on every hobby will contribute to its pages.

Each issue will continue to contain a a free inset of a Wood-work Design Chart. In addition, the first two issues of the publication in its new form (October 4th and 11th) will contain all the parts for making the fine flying model seaplane shown in the photograph here.

In future it will be published by George Newnes Ltd., 8/11, Southampton Street, Strand, W.C.2.

In March 1932, the Hobbies magazine (now Hobbies and Practical Wireless) started including a Trix Supplement promoting Stefan Bing's Trix metal construction sets, which seemed to be accompanied by a corresponding spike in the amount of advertising and articles related to Bassett-Lowke Ltd.

Most of the museum's archive collection of Hobbies weekly (from the Michael Gilkes collection) consists of bound copies, which, prior to volume 70, don't seem to have been bound with the covers. Volume 70 covers are orange-and-turquoise, with the relaunched and redesigned "Newnes-published" Hobbies starting in October 1930 (volume 71).

After the flurry of new subjects and writers of the early 1930s, the magazine settled down again and reverted to using the same basic cover design from issue to issue, with colour schemes typically being used to colour-code volumes, and changing with the first issue of each volume.

The comparatively low scan quality of many of these images around the spine edge is due to the magazines having been tightly bound into volumes - there's no obvious solution to this other than cutting the sheets out, which we're reluctant to do.

Exciting start of the Newnes era:

Information and dates extracted from the British Library indexes