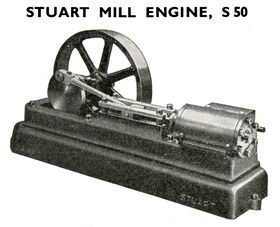 5⁄8-inch Bore, 1 1⁄4-inch Stroke A perfect model engine that can be built without tools.

A model of a typical Mill Engine as was in use during the last century in the big cotton mills in the North of England. It is the handsomest type of engine ever built. The bed is 8½-inches long.

Very clear instructions illustrated with complete drawings are sent with each set, and will enable anyone not previously conversant with engineering to build the model with success; a small spanner, pliers and screwdriver are sufficient. Every part is guaranteed; if found faulty, it should be immediately returned to us for replacement. The Spanner is provided. 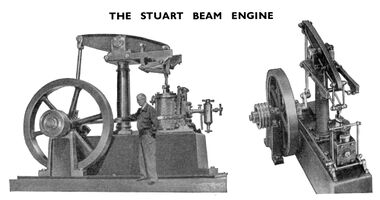 1965: The Stuart Beam Engine, complete with "trick photography" to add an image of a person to indicate the scale of the original engines being modelled [image info]

This is not a scale model of any particular prototype, but we have tried to give it some of the beautiful lines of these famous old engines. The main castings are shell-moulded.

Modern engines being totally enclosed are not particularly interesting, but in the Beam engine everything can be seen and you will agree that Watt's Parallel Motion – it was patented in 1784 – is most fascinating to watch.

A beam engine works very slowly – so its movements can be followed with ease. Moving so slowly it only requires a small boiler. The Stuart No. 500 boiler exactly suits it.

In designing the engine we have had in mind all the time the absolute beginner. It is the simplest possible model to construct. For instance, the links made of flat material need not be turned; the engine will work just as well. At the same time we are sure that it will appeal to the skilled engineer, for he can elaborate construction to his heart's desire.

The "Major" is a non-condensing beam engine and typical of the smaller industrial beam engines of the 1840-50 period. It is based on an eighth size model designed by Mr. George Gentry. and described in the Model Engineer in 1914. This version by the late Mr. H.A. Taylor featured in the Model Engineer in 1968 now incorporates several modifications, notably a reduction in the bore, a redesigned feed pump and replacement of Whitworth threads by BA. We supply castings, finished piston rings and drawings,, but not materials, screws, etc. The finished engine weighs about 64 lb. (29 kg.). 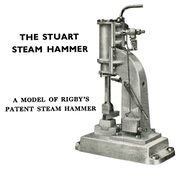 Model engineers will welcome this opportunity of building something entirely fresh. It is a handsome model, 10½ inches high and 9 inches back to front. It weighs 9lb. The diameter of the cylinder is 1 inch; stroke 2 inch

Like our Beam Engine, it has the merit of needing quite a small boiler and quite a low steam steam pressure (10 lb. per sq. inch is ample). The No. 500 boiler is quite large enough.

With the very kind cooperation of the manufacturers, R.G. Ross & Son Ltd., we have made a close copy of their modern hammer.

As in full-size practice there is sensitive control of the stroke from the gentle tap to a full power forging blow, which is really dangerous – so be careful!