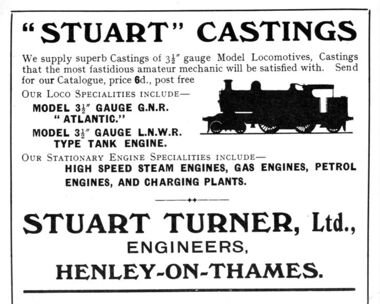 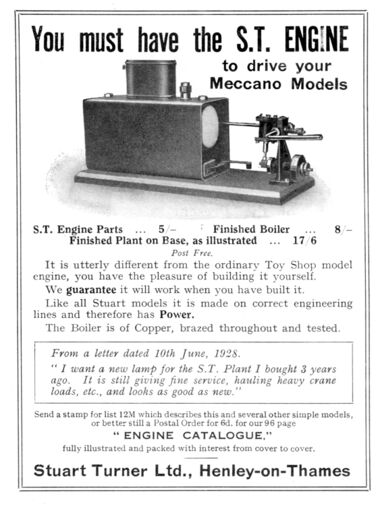 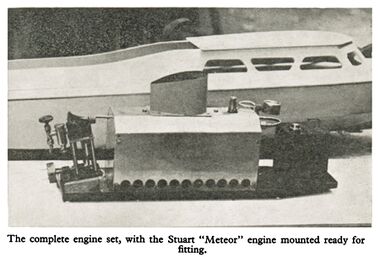 1937: Stuart Meteor engine waiting to be fitted to a Bassett-Lowke Streamlinea boat. From an article in Hobbies Annual. [image info]

The origins of Stuart Turner model steam engines goes back to 1898, with the Stuart Turner No.1 engine. The business immediately became a mainstay of the model engineering community, and the company "Stuart Turner" was formally founded in ~1906 to sell small working model stream engines and castings.

As Stuart Turner Ltd. became more involved in larger-scale engineering, the "model engineering" side of the business was split off as Stuart Models. Both companies are still going today.

Stuart Turner (1869-1938) had a background in engineering, and had worked on marine engines on the Clyde (a world centre for marine engineering), and then worked in Jersey on electrical generators. In around 1897 he got a job managing the electrical generator at the old manor house, Shiplake Court, near Henley-on-Thames. This seems to have given him enough spare time and energy to get serious about making miniature steam engines as a hobby, just as model engineering started to take off in the UK as a pastime. Turner built an engine based on his own using custom castings (which he ordered), and having sent information on the engine to Percival Marshall (who was making it his business to champion the creation of a small model engineering industry in the UK), Marshall published an article on the engine in one of the first issues of Model Engineer magazine (1898-), and soon Turner was being besieged with people wanting to place orders.

Turner set up in business (1898?) and was joined by Alec Plint in (1903?), and opened the Stuart Turner: Model Engines and Castings shop on Duke Street, Henley-on-Thames in 1906. Over the next ten years or so, the company took over numbers 45 & 47 Market Place, and expanded again to take over number 43 as well, before moving in 1917 to the building that had been the old Broadgate Inn, which became the Stuart Turner Shiplake Works.

Turner himself retired from the company in around ~1920.

Stuart Turner's solid engineering background on large-scale engines meant that he had a respect for the necessity for accurate machining, and where some toy companies had a large range of stationary engines in almost any size and configuration, Turner's product differentiation was more engineering-based. Model engineers could create a wide range of hardware themselves, but usually drew the line at setting up their own metal foundries, so Turner could supply the necessary cast parts, in sets, as part of complete kits, or incorporated into finished engines (and could also supply the Stuart lathe for finishing).

Unlike their competition, Turner didn't seem to produce toy or model boats (like Bowman) or model road vehicles (like Mamod). While model engineers were welcome to buy a Turner model marine engine and build it into a boat themselves, Turner's focus was on the engine – matters of superstructure were up to the buyer, and since the buyer would obviously be technically adept, with a home workshop of their own, building an engine into something was obviously something that they'd want to do themselves. The company did produce castings for model railway locomotives, as this was something that, again, hobbyists usually couldn't do at home.

MODEL ENGINEERS have a wide variety of interests. We, at Stuart Turners, have always specialised in the field of steam engines, marine and stationary, but you will see that we do also supply castings and materials for petrol engines, compressors, pumps, etc. The essence of our policy is to supply the need for really good small castings for the amateur to machine. We have been told so often that Stuart castings are the best in the world that we almost believe it!

At the same time, we realise that not everyone has facilities to carry out fairly elaborate machining processes. We are therefore increasing the number of "kits" to cover models which can be built without any, or with minimal, machining. We hope this policy will help to introduce more people to the pleasures of a hobby that is truly rewarding and can become an absorbing interest.

In this catalogue we have set out, in some detail, what we can offer at present. We have ideas for the future and are responsive to suggestions. Our foundry is at your service but bear in mind we cannot make a casting better than your pattern, so let the pattern be as near perfect as you can make it.

So far as standard production is concerned we continue to make as many castings as are suitable by the shell moulding process. This is better known now than when we produced our first castings in this way (for a 13in. high model of Henley Church Tower) in 1955, but, for those who are not familiar with shell moulding, the process involves a mixture of sand and bakelite dumped on to a heated metal pattern (4000 F.) which, in a few minutes, cooks the mixture forming a "shell." Another "shell" is made of the other side of the pattern and the two are clamped together.

You then have a sharp mould of your pattern, hard and strong, bits of sand cannot fall off, also it is perfectly porous all over—blowholes most unlikely.

Turn-of-the-century model steam engine manufacturers has a tendency to near-anonymity when it came to branding their goods, and, combined with the generic nature of many of the designs, it can be difficult or impossible to work out who made a particular engine unless there's an obvious catalogue image that corresponds exactly. This might partly be due to the castings work being contracted out, and partly due to makers possibly wanting to be able to keep their options open and make machines to be sold under different names.

Whatever the reason, anyone browsing the "stationary steam engines" pages of a general Gamages or Army and Navy catalogue might have no way of knowing who actually made the products, and chain stores had a policy of promoting their own store brand, and not going out of their way to promote named manufacturers whose products could then be bought elsewhere. Artwork supplied by Bing and Georges Carette might have a tiny barely-legible "GBN" or "GCN" (Gebruder Bing Nuremberg, Georges Carette Nuremburg) as a clue to who made the engine in a catalogue, but the engines themselves tended not to display heavy branding.

Turner's engines, however, tended to have a very obvious STUART lettering incorporated in the side of their cast base, so when an image of a Turner engine appeared in a Bassett-Lowke catalogue there wasn't much point in B-L presenting it as being anything but a Stuart engine. Turner's smaller engines started being branded as "'S.T." engines, possibly because they weren't large enough or didn't have a sufficiently large side cast area to hold the STUART name.

Stuart Turner engines quickly took up residence in the early pages of Bassett-Lowke model engineering catalogues, and after a couple of small-ads in 1925 and 1927, the company began heavy advertising with quarter page ads in Meccano Magazine through 1927-1929, and again from 1936-1940. The company also advertised through the weekly Hobbies magazine.

Stuart Turner produced an engine for the Dayton motorcycle in 1910, followed by their own shaft-driven motorcycle. This was followed by a successful range of portable electrical power generators (installed on Ernest Shackleton's polar expedition ship). The 1930s saw the introduction of a successful range of outboard boat engines, lightweight "back-packable" S.T. generators being used by two teams trying to conquer Everest, and the development of techniques for pump technology. With this range of new enterprises on the horizon, the model engineering business was separated out as Stuart Models in around 1930.

The following 51 files are in this category, out of 51 total.