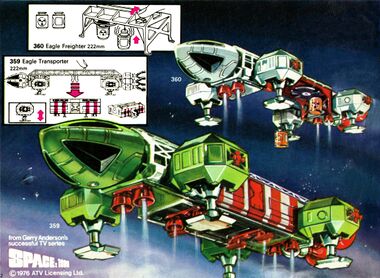 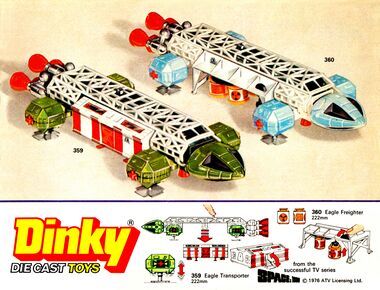 Set on the Moon, the premise of the series was that the Moon had been blown out of Earth's orbit by a freak accident, leaving the occupants of Moonbase Alpha trapped and subject to various adventures as the base (and the Moon) encountered various alien civilisations and forces.

The Eagle Transporter was the workhorse of Moonbase Alpha. An excellent piece of intelligent designwork, the Eagles were modular craft designed for use in a vacuum, where corrosion and wind resistance weren't factors. While the craft had a smoothly streamlined pressurised cabin with two window slots (inspired by an insect head), the rest of the craft body consisted of a longish, lightweight, defiantly-functional scaffolding-type framework connecting the cab to four heavy-duty stumpy shock-absorbing legs, and to a set of rocket engines bolted to the back.

The central section was a space designed to take a detachable, roughly Portacabin-sized module that might be designed as a passenger compartment, or a goods bay, or a nuclear material transport bay.

The Eagles were exactly the sort of general-purpose vehicle that you'd need if you were trying to run a moonbase, and the apparent orignality and eminent suitability of the design earned it a lot of fans.

The series was distinguished by excellent production design, as the sets had already been designed and built for a planned third series of UFO.

The concept for the UFO third series was that the viewer would jump ahead almost twenty years (from the 1980s to 1999), to see the UFO story continue to play out with SHADO now equipped with new personnel, new spaceships, and a very much enlarged moonbase. The moonbase internal design was influenced by "2001: A Space Odyssey", and featured modular reusable sections, with walls covered with controls, and rather than have PCs sitting on desks, information terminals were embedded in pillars, which allowed users to read data from screens at standing head height. Uniforms were practical "Star-Trek-style pajamas", suitable for a temperature-controlled environment. The sets were, and looked, expensive.

The choice of establishing year in the title, 1999, may have been a conscious attempt to use the latest date possible that wouldn't imply a connection to "2001", which also featured a moonbase.