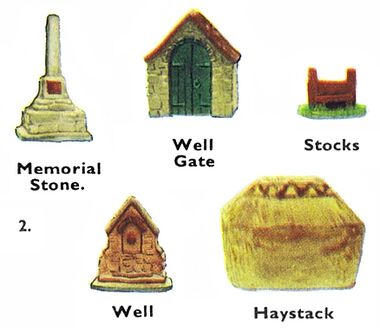 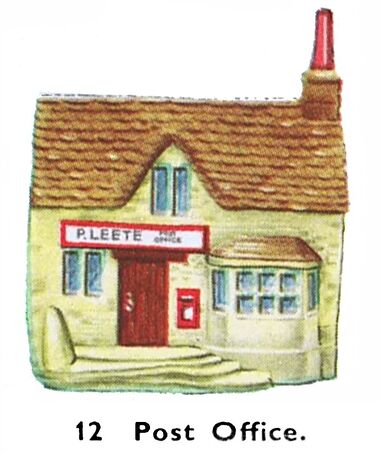 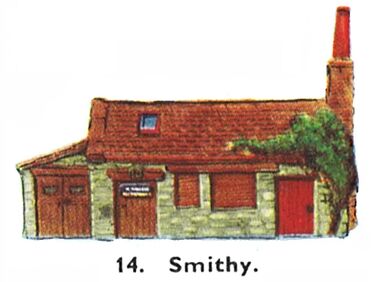 The 1:42-scale Cotswold Village Series sold by Tri-ang under the Spot-On name from early 1960 (or perhaps late 1959) seems to to have been the first result of Lines Brothers' takeover of the rubber moulding company Young and Fogg Rubber Co. Ltd. of Wimbledon in 1958. It's unusual in using the "Spot-On" brandname for a product line that wasn't produced at the Castlereagh factory, Belfast NI.

The rubber material and hollow moulding process produced an unusual finish. This was better suited for rounded stonework than brickwork, and for "rustic" buildings than those with razor-sharp edges and lines (which would show the warping and distortions of the hollow moulded rubber), so a set of models based on quaint (and irregular, and slightly saggy) traditional Cotswold buildings with a honey-coloured finish was a pretty smart idea.

It's not unusual for these hollow rubber models to start to look rather squashed after a period in storage (after perhaps being leant on by other items for some time), and it's common to find these pieces packed with newspaper or bits of wood or cardboard, either to correct an existing warpage issue caused by storage, or to prevent new problems arising. This isn't normally considered to be a sign of a serious problem – packing usually makes the moulding return to its original shape quite easily, and once a piece has been kept "packed" for a while, there's not an obvious reason to remove the supporting packing material.