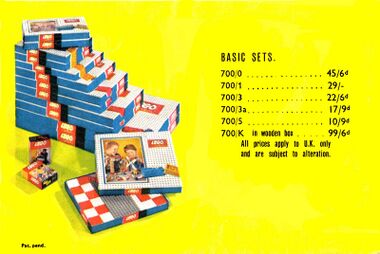 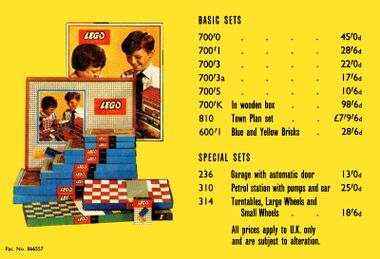 After the initial simple 1947 sets of "Automatic Binding Bricks", later renamed "Lego Mursten" ("Lego Bricks", 1953), Lego continued producing simple sets of standard bricks (the Basic Sets) through the appearance of Lego System (1955) and Town Plan, and through the 1958 brick redesign and into the early 1960s.

These generic sets were supplemented with a number of small sets for simple buildings (single-storey, plus a church) to go onto the Town Plan Set baseboards, plus accessory packs for adding more specialised parts. At this point, the Lego company was still thinking in terms of Lego System being an extensible playset with a single scale.

The idea of sets to make separate, entirely stand-alone models (which Lego is now strongly associated with) didn't appear until later in the 1960s, with the breakup of the "single system" idea being accelerated by the appearance in 1962 of the Lego wheels parts (which made cars that were much too large to work with the Town Plan Set baseboard), and the appearance of the Lego Train system in 1966.