An undated folded single-sheet Lego System catalogue, from around 1960. 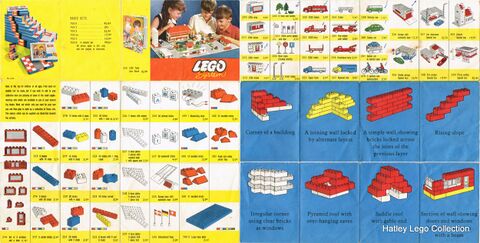 Single-sheet catalogue, front and back

One of the real problems with establishing initial dates for Lego parts is the lack of dates or other references on many Lego catalogues. Although there are several online databases of Lego parts and when they were introduced, we found that with this catalogue, depending on which online databases you believed, the inclusion of some of the items gave the catalogue a date no later than 1958, and also no earlier than 1963! Which, or course, doesn't make sense.

The catalogue appears to show the "new" bricks, which everyone (including Lego) seems to agree appeared in 1958, and where the patent was submitted in July 1958. The "Patent Pending" mark suggests that this main patent might not yet have been granted – a subsequent catalogue a few years later replaces the "pending" notice with the number of the 1958/1961 patent granted in October 1961, so presumably this leaflet is no later than early 1962 (and probably no later than 1961), for the status to still be "pending".

A pretty reputable source says that the British wooden boxed set 700/K started being produced from 1960.

The traffic signs ("coming soon") were supposedly introduced in the late 1950s, but may conceivably have been introduced a little later in the UK, depending on whether they needed redesigning for the UK market. The UK "Town Plan" baseboards certainly needed redesigning for the UK market due to British people driving their cars on the left rather than the right, and the UK road signage might be expected to be different, too. One might expect the signs to have been redesigned as part of the same initiative, and we'd be surprised if a timelag for the signs carried over much longer than the baseboards (which were confidently advertised as available) ...

... so we're guessing that the catalogue is actually from 1960, and might even be the first UK version.

The Patent applications for the roof bricks and windows weren't filed until 1959 and 1964 respectively, but these might have been on sale before the UK patents were submitted (online sources say 1958...). The catalogue doesn't include the wheels-and-axles and turntable sets (400-402, supposedly introduced in 1964), and only shows one domestic car, a Volkswagen Beetle.