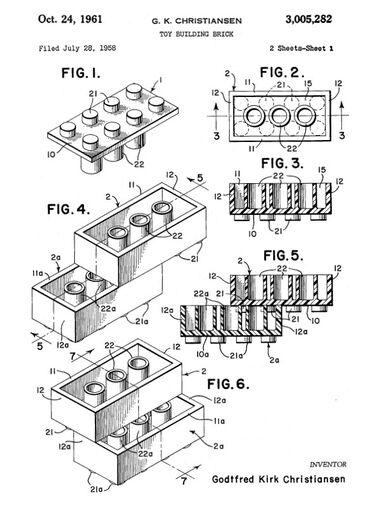 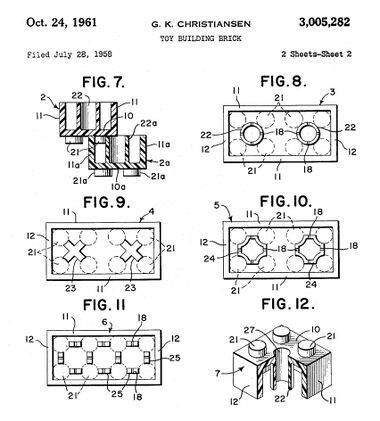 1958: Alternative (and not quite as good) versions of the Lego design [image info]

The Modern Lego Brick (as we know and love it) dates from ~1958, and was the result of a focused piece of redesign work that changed the brick internals, and allowed dedicated roof pieces.

The original Page brick had no internal structure and was essentially an empty box with end-slots. It looked crude because it was. As one of the pioneers of this sort of design, Page knew from hard experience that when one was using fairly cutting edge technology, one had to keep the design simple in order to avoid nasty production issues. His interlocking building cubes had suffered slightly (but noticeably) from mould misalignments, leading to varying wall thicknesses, and while it would have been great to develop a second-generation brick with internal gripping structure, Page was probably just happy that the production of his simple injection-moulded hollow brick (a slightly scary technology for a small company in the 1940s) worked at all.

Page's side-slots had been a cunning way of adding extra insurance against production problems or variations in the raw materials, as the slots allowed the base of the brick to open and close like a clothespeg, so even if a batch of plastic was harder or more brittle than normal, the amount of flex would be reasonably consistent.

Ten years after Page's bricks, and after years of producing minor variations, Lego decided that it was time to start trying to mould something more ambitious. Where the original bricks had only been designed to gripped the perimeter of a group of studs (usually four or more), which mean that the tolerances didn't have to be super-super-exact, Lego's new bricks would grip every single stud, at three or four points. they would produce beam bricks that were a single row wide, and even single-stud bricks. This required a great deal of confidence in manufacturing consistency: a single-stud 1×1 brick had more challenging geometry, with very thick walls in proportion to the space enclosed: if the plastic was harder than it was supposed to be, and the walls didn't flex as much as they were supposed to, it might be more difficult to persuade a small brick to mate with a stud, and any variation in the amount of forced needed to clip and unclip bricks would be annoying to users, and make them feel that they were using a lower-grade product.

The prototyping of the new system involved a series of meetings with chemicals company Bayer AG, who (by tweaking the plastic's properties) produced "test" bricks with a range of different properties so that the Lego company could choose their preferred amount of grip, and then agreed to provide Lego with a consistent supply of the chosen plastic formulation, correct to high tolerances. In return, Lego didn't buy their raw material from anyone else.

The designs showed an understanding of how plastic deformation could best produce springiness. Every part that had a point of compression, where it deformed inwards, was given a corresponding space for it to deform outwards. The brick walls could deform outward as there was a deliberate 0.1mm gap between adjacent brick surfaces, the hollow tubes could deflect inwards at their four points of contact but were free to deflect outwards into the spaces between pegs, and with the single-strip bricks and plates, when an underside "peg was squeezed on both sides by adjacent pegs, it was free to bulge outwards at right angles, into the space between it and the nearby walls. If a single-width strip had been designed "naively" by being divided up into square-walled cells, it would be progressively more difficult to click it into position, the longer it was – compression would build up cumulatively along the length of the strip.